USD/JPY slips to a fresh weekly low (127.02) amid the recent weakness in US Treasury yields, and looming developments in the Relative Strength Index (RSI) may warn of a larger pullback in the exchange rate if the oscillator falls below 70 to indicate a textbook sell signal.

USD/JPY bucks the US Dollar strength seen across foreign exchange markets as there appears to be a shift in investor confidence, and a further deterioration in risk appreciate may keep the exchange rate under pressure with the US stock market on the cusp of testing the yearly low.

As a result, USD/JPY may continue to carve a series of lower highs and lows over the remainder of the month as the RSI shows the bullish momentum abating, and the Bank of Japan (BoJ) interest rate decision may do little to influence the exchange rate as the central bank remains reluctant to move away from its Quantitative and Qualitative Easing (QQE) Program with Yield-Curve Control (YCC).

At the same time, the update to the US Personal Consumption Expenditure (PCE) Price Index may also generate a limited reaction as signs of sticky inflation is likely to keep the Federal Reserve on track to implement a series of rate hikes over the coming months, and the diverging paths for monetary policy may keep USD/JPY afloat as Chairman Jerome Powell and Co. expect to “begin reducing its holdings of Treasury securities and agency debt and agency mortgage-backed securities at a coming meeting.”

In turn, the decline from the yearly high (129.41) may turn out to be a correction in the broader trend as the Federal Open Market Committee (FOMC) shows a greater willingness to normalize monetary policy at a faster pace, and the tilt in retail sentiment looks poised to persist as traders have been net-short USD/JPY since late January. 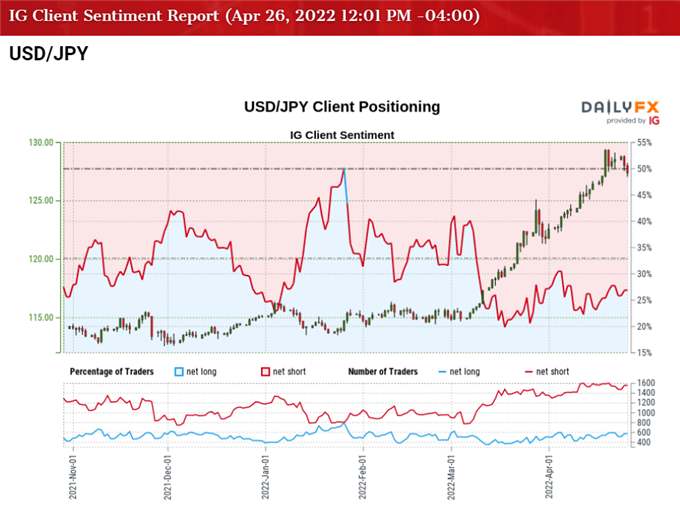 The IG Client Sentiment report shows only 24.82% of traders are currently net-long USD/JPY, with the ratio of traders short to long standing at 3.03 to 1.

With that said, the diverging paths between the FOMC and BoJ may keep USD/JPY afloat as market participants brace for higher US interest rates, but a move below 70 in the RSI is likely to accompany a larger pullback in the exchange rate like the price action seen during the previous month. 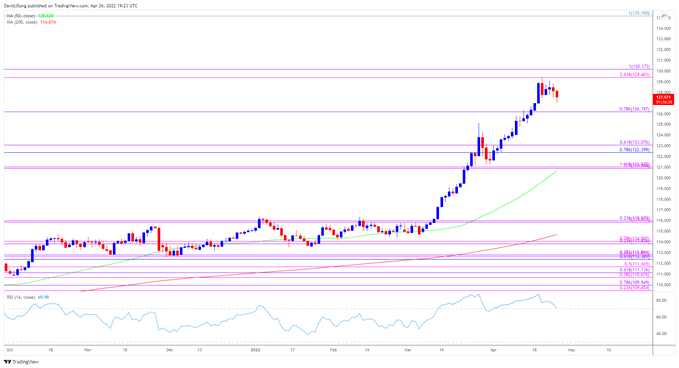