USD/CAD struggles to retain the advance from the start of the week as the update to the US Consumer Price Index (CPI) sparked a bearish reaction in the US Dollar, and the Bank of Canada (BoC) interest rate decision may drag on the exchange rate as the central bank is expected to deliver its third rate hike in 2022.

USD/CAD pulls back from a fresh weekly high (1.2662) as the smaller-than-expected rise in the core measure for US consumer prices reinforces the Federal Reserve’s expectation that “the firming of monetary policy, alongside an eventual waning of supply–demand imbalances, would help to keep longer-term inflation expectations anchored and bring inflation down over time.”

As a result, the Federal Open Market Committee (FOMC) may look to unload its holdings of Treasury securities and agency debt and agency mortgage-backed securities later this year, and the BoC meeting may curb the recent series of higher highs and lows in USD/CAD as the central bank is expected to deliver another 50bp rate hike.

At the same time, the BoC may unveil plans to winddown its balance sheet as Governor Tiff Macklem and Co. are slated to release the quarterly Monetary Policy Report (MPR), and an adjustment in the central bank’s exit strategy may trigger a larger pullback in USD/CAD as the exchange rate struggles to push back above the 50-Day SMA (1.2660).

Nevertheless, expectations for a further shift in Fed policy may keep USD/CAD afloat ahead of the next interest rate decision on May 4 as Governor Lael Brainard insists that the central bank could “reduce the balance sheet at a rapid pace as soon as our May meeting,” and a further advance in the exchange rate may continue to alleviate the tilt in retail sentiment like the behavior seen during the previous year. 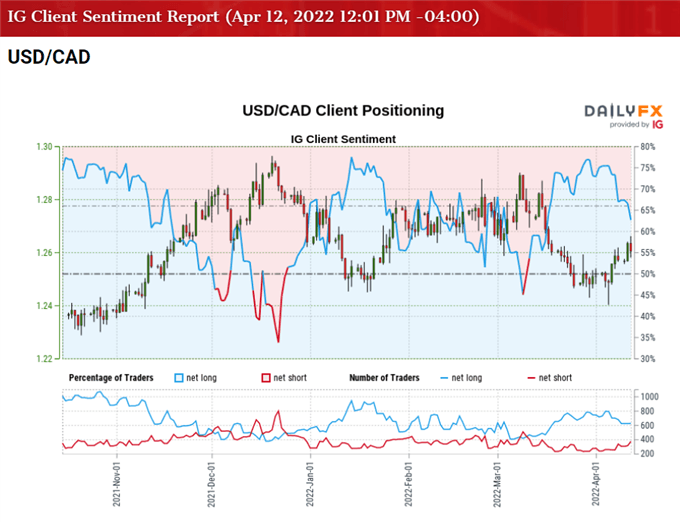 The IG Client Sentiment report shows 62.94% of traders are currently net-long USD/CAD, with the ratio of traders long to short standing at 1.70 to 1.

With that said, the BoC rate decision may undermine the advance from the yearly low (1.2403) if the central bank delivers a 50bp rate hike and embarks on quantitative tightening (QT), but USD/CAD may continue to retrace the decline from the March high (1.2901) if Governor Macklem and Co. endorse a preset course for monetary policy. 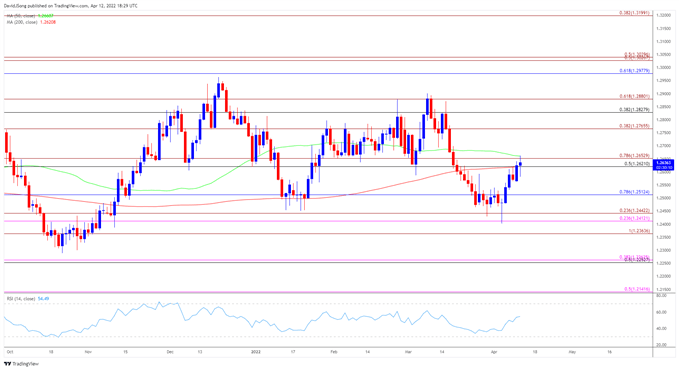