US Inflation Hits Highest Rate Since 1981 at 8.5%, Dollar Falls on Core CPI Miss

Most Read: U.S. Stock Indices Have a Serious Choice to Maker After High Volatility in Q1

Inflationary forces strengthened last month as Americans paid more for gasoline and groceries, pushing the cost of living to the highest level in more than four decades - a challenging economic environment that puts the onus on the Federal Reserve, whose credibility is on the line, to act aggressively to restore price stability.

According to the Bureau of Labor Statistics, CPI, which measures a comprehensive range of goods and services, rose 1.2% in March from a month earlier, lifting the annual rate to 8.5%, the fastest pace since December 1981 and more than four times above the central bank’s 2% target. Economists polled by Bloomberg News had forecast the headline index advancing 1.2% month-over-month and 8.4% year-over-year (see below).

Following the onset of the COVID-19 pandemic, unprecedented monetary and fiscal stimulus, robust household spending, large wage increases, and persistent supply chain bottlenecks created the right conditions for inflation to develop and rise unrestrained. While the pernicious trend was expected to subside early in the first quarter, substantial economic sanctions imposed on Russia for its invasion of Ukraine disrupted global trade flows, sending oil and other raw material prices soaring. This situation upended Wall Street’s assumptions, throwing a monkey wrench into the calculus.

Drilling down into the details, the latest data reflected the full brunt of the commodity market price shock caused by the war in Eastern Europe that started in late February. According to the breakdown, food costs surged 1.0% month-over-month and 8.8% year-over-year, squeezing household budgets, and eroding the purchasing power of lower-income Americans, who spend a large portion of their earnings on staples. The energy component, meanwhile, saw the largest increase, up 11% month-over-month and 32% year-over-year amid higher gasoline prices at the pump. The silver lining here, however, is that part of these gains will be reversed in April, as WTI crude has undergone a sharp downward correction in recent weeks, down more than 20% from last month's high. The recent decline in oil, coupled with favorable base effects, suggests the March CPI figure may be the peak of the cycle.

Focusing on other elements of the report, the core inflation indicator, known to reduce the transitory noise and reflect longer-running trends in the economy, climbed 0.3% on a seasonally adjusted basis and 6.5% in the 12 months through March, slightly below forecasts. Although the numbers were high, it was reassuring to see a 3.8% sequential drop in used cars and trucks, marking the second consecutive monthly decline. The slowdown in second-hand vehicles, which has been a major contributor to the elevated core readings since last year, suggests that underlying price pressures are not broadening as aggressively as before, a sign that the worst may be over, absent new and unpredictable shocks.

The table below shows the changes in all CPI components 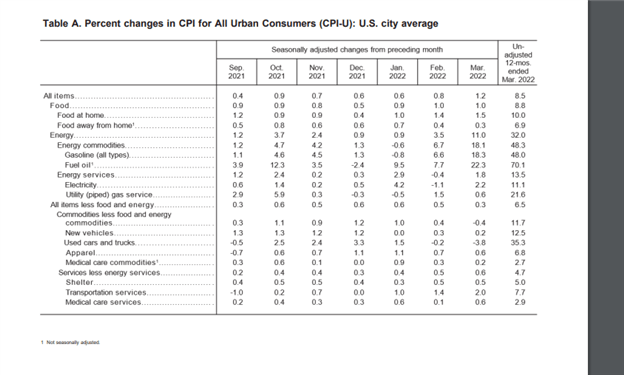 The U.S. Dollar, measured by the DXY index, erased gains and fell modestly after the inflation report crossed the wires as short-term Treasury yields began to retreat on the core CPI data miss. While softening core inflation is welcomed, it may not change the monetary policy outlook at this time, meaning that the Fed is likely to press ahead with its plans to front-load interest rates increases at its May and possibly June meeting. However, if the inflation profile improves substantially in the coming months, policymakers could become less aggressive in withdrawing stimulus, but this is not the baseline scenario now.