EUR/USD struggles to retain the advance from earlier this week after testing the 50-Day SMA (1.1173), and fresh data prints coming out of the US may drag on the exchange rate as the US Non-Farm Payrolls (NFP) report is anticipated to show a further improvement in the labor market.

EUR/USD pulls back from a fresh weekly high (1.1185) as European Central Bank (ECB) Chief Economist Philip Lane tames speculation for an imminent shift in monetary policy, with the official emphasizing that “the degree of monetary policy stimulus put in place to address the pre-pandemic challenge of persistent below-target inflation can be normalised in a gradual fashion towards a more neutral setting.”

Lane goes onto say that ‘the calibration of net purchases for the third quarter will be data-dependent and reflect our evolving assessment of the outlook,” and the comments suggest the Governing Council is in no rush to normalize monetary policy as the board member insists that “any adjustments to our interest rates will be gradual.”

As a result, the diverging paths for monetary policy may continue to produce headwinds for EUR/USD as the Federal Reserve plans to implement a series of rate hikes over the coming months, and NFP report may push the central bank to normalize monetary policy at a faster pace as the economy is anticipated to add 490K jobs in March.

At the same time, the Unemployment Rate is expected to narrow to 3.7% from 3.8% during the same period, which would mark the lowest reading since February 2020, and the development may force the Federal Open Market Committee (FOMC) to adjust its exit strategy at the next interest rate decision on May 4 as the central bank “expects to begin reducing its holdings of Treasury securities and agency debt and agency mortgage-backed securities at a coming meeting.”

Until then, EUR/USD may struggle to retain the advance from the yearly low (1.0806) as the FOMC normalizes policy ahead of its European counterpart, while the tilt in retail sentiment looks poised to persist as traders have been net-long the pair since the middle of February. 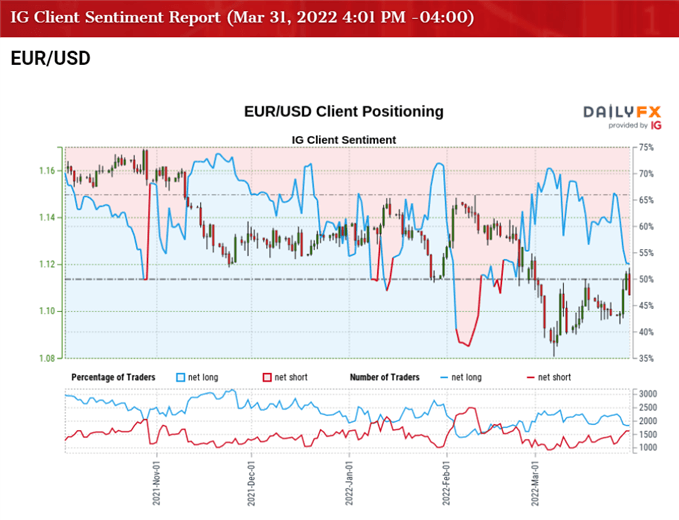 The IG Client Sentiment report shows 58.99% of traders are currently net-long EUR/USD, with the ratio of traders long to short standing at 1.44 to 1.

The number of traders net-long is 9.25% higher than yesterday and 10.55% lower from last week, while the number of traders net-short is 16.67% lower than yesterday and 1.78% lower from last week. The drop in net-long interest has alleviated the crowding behavior as 63.95% of traders were net-long EUR/USD earlier this week, while the decline in net-short position comes as the exchange rate manages to test the 50-Day SMA (1.1173).

With that said, EUR/USD may continue to pull back from the moving average as the US NFP report is anticipated to show a further improvement in the labor market, and the advance from the yearly low (1.0806) may turn out to be a correction in the broader trend amid the diverging paths between the ECB and FOMC. 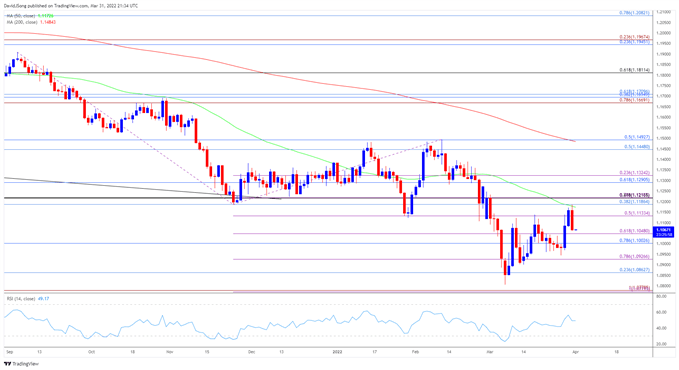