AUD/USD extends the series of higher highs and lows from earlier this week on the back of US Dollar weakness, and the exchange rate may continue to retrace the decline from the November high (0.7536) even as a growing number of Federal Reserve officials strike a hawkish outlook for 2022.

Recent price action in AUD/USD raises the scope for a larger correction ahead of the next Federal Open Market Committee (FOMC) interest rate decision on January 26 as it clears the monthly opening range, but it seems as though the central bank will unveil a more detailed exit strategy over the coming months as Fed Governor Lael Brainard insist that the central bank is “taking actions in the monetary policy front that I have confidence will be brining inflation down” during her confirmation hearing in front of the Senate Committee on Banking, Housing and Urban Affairs.

Governor Brainard acknowledged that the Fed is on track to implement higher interest rates this year as “the committee has projected several hikes over the course of the year,” with the official going onto that “we started to discuss shrinking out balance sheet” as the FOMC prepares to normalize monetary policy.

The diverging paths between the FOMC and Reserve Bank of Australia (RBA) may produce headwinds for AUD/USD as Governor Philip Lowe and Co. remain in no rush to implement a rate hike, but recent price action raises the scope for a larger rebound in the exchange rate as it extends the series of lower highs and lows from the start of the week.

In turn, AUD/USD may continue to retrace the decline from the November high (0.7536), and a further appreciation in the exchange rate may generate a flip in retail sentiment like the behavior seen during the previous year. 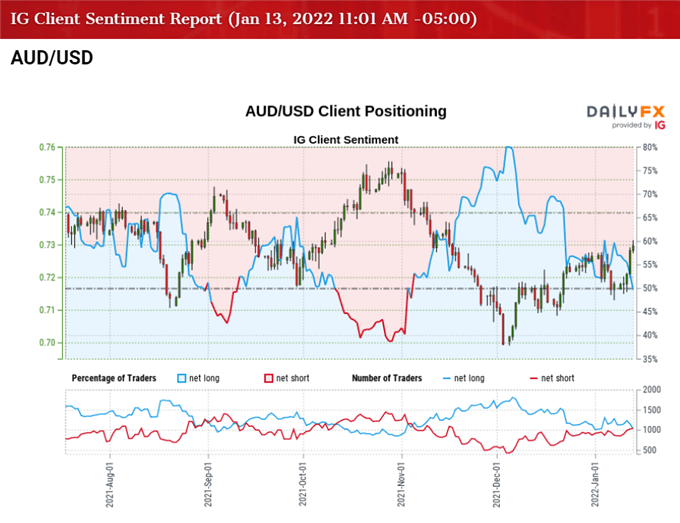 The IG Client Sentiment report shows 50.99% of traders are currently net-long AUD/USD, with the ratio of traders long to short standing at 1.04 to 1.

The number of traders net-long is 0.72% lower than yesterday and 11.10% lower from last week, while the number of traders net-short is 5.99% higher than yesterday and 25.09% higher from last week. The decline in net-long interest comes as AUD/USD trades to a fresh monthly high (0.7314), while the jump in retail position has largely removed the tilt in retail sentiment as 53.38% of traders were net-long the pair earlier this week.

With that said, the advance from the 2021 low (0.6993) may turn out to be a correction in the broader trend amid the diverging paths between the RBA and FOMC, but the exchange rate may stage a larger recovery over the coming days as it clears the December high (0.7278).