USD/JPY struggles to retain the advance from the start of the week even though the 10-Year US Treasury yield climbs to a fresh monthly high (1.75%), and the exchange rate may face a larger pullback ahead of the US Non-Farm Payrolls (NFP) report as the Relative Strength Index (RSI) slips below 70 to indicate a textbook sell signal.

USD/JPY trades in a narrow range after hitting a five year high as the US ISM Non-Manufacturing survey weakens more-than-expected in December, with the index narrowing to 62.0 from 69.1 the month prior.

As a result, USD/JPY may consolidate ahead of the NFP report as the US economy is expected to a pickup in job growth, but a dismal development may produce headwinds for the Dollar as renewed restrictions driven by the Omicron variant puts pressure on the Federal Reserve to delay normalizing monetary policy.

At the same time, a better-than-expected NFP report may trigger a bullish reaction in USD/JPY as it puts pressure on the Federal Open Market Committee (FOMC) to implement higher interest rates sooner rather than later, and a further improvement in the US labor market may encourage the central to adjust the forward guidance as the minutes from the December meeting revels that “several participants viewed labor market conditions as already largely consistent with maximum employment.”

In turn, USD/JPY may exhibit a bullish trend in 2022 amid the deviating paths between the FOMC and Bank of Japan (BoJ), but a further appreciation in the exchange rate may fuel the tilt in retail sentiment like the behavior seen during the previous year. 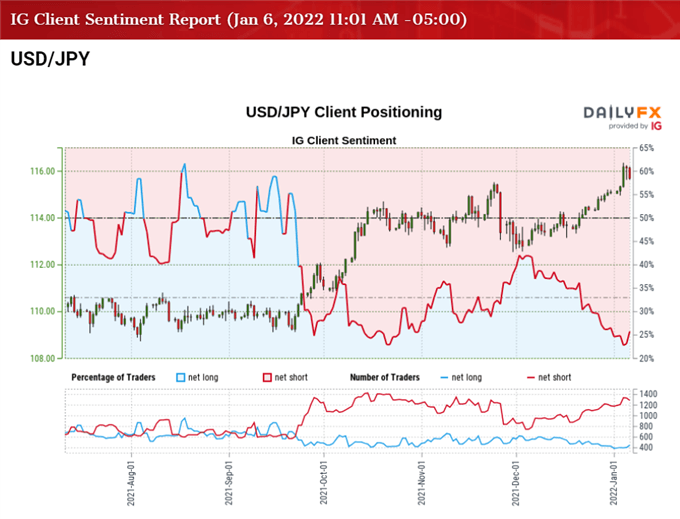 The IG Client Sentiment report shows only 27.73% of traders are currently net-long USD/JPY, with the ratio of traders short to long standing at 2.61 to 1.

The number of traders net-long is 3.45% higher than yesterday and 9.34% higher from last week, while the number of traders net-short is 0.95% lower than yesterday and 4.77% higher from last week. The recent rise in net-long interest has done little to alleviate the crowding behavior as 37.46% of traders were net-long USD/JPY during the second full-week of December, while the rise in net-short position comes as the exchange rate struggles to retain the advance from the start of the week.

With that said, USD/JPY may consolidate ahead of the US NFP report as the Relative Strength Index (RSI) falls back from overbought territory to indicate a textbook sell signal, but the exchange rate may exhibit a bullish trend in 2022 as the FOMC prepares to implement higher interest rates.