AUD/USD appears to be defending the weekly low (0.7090) even as the Federal Reserve shows a greater willingness to normalize monetary policy sooner rather than later, and the update to Australia’s Employment report may prop up the exchange rate as job growth is expected to increase for the first time since July.

AUD/USD slipped to a session low (0.7136) as the Federal Open Market Committee (FOMC) now plans to “reduce the monthly pace of its net asset purchases by $20 billion for Treasury securities and $10 billion for agency mortgage-backed securities,” with the update to the Summary of Economic Projections (SEP) revealing a steeper path for the Fed funds rate as Chairman Jerome Powell and Co. forecast three rate-hikes for 2022.

As a result, AUD/USD may continue to exhibit a downward trend over the coming months as the Reserve Bank of Australia (RBA) remains in no rush to implement higher interest rates, and it remains to be seen if an improvement in Australia’s labor market will sway the central bank as employment is expected to increase 205K after contracting for the last three consecutive months.

At the same time, the Unemployment Rate is seen narrowing to 5.0% from 5.2% in October, and the RBA may come under pressure to further winddown its emergency measures after discontinuing its yield-curve control program in November. However, it seems as though Governor Philip Lowe and Co. are on a preset course as the central bank plans to “purchase government securities at the rate of $4 billion a week until at least mid-February 2022,” and the deviating between the RBA and FOMC may continue to produce headwinds for AUD/USD as market participants prepare for higher US interest rates.

In turn, AUD/USD may continue to deprecate ahead of the next RBA meeting on February 1, 2022, but the rebound from earlier this month has helped to alleviate the tilt in retail sentiment even though open interest is 0.56% higher from last week. 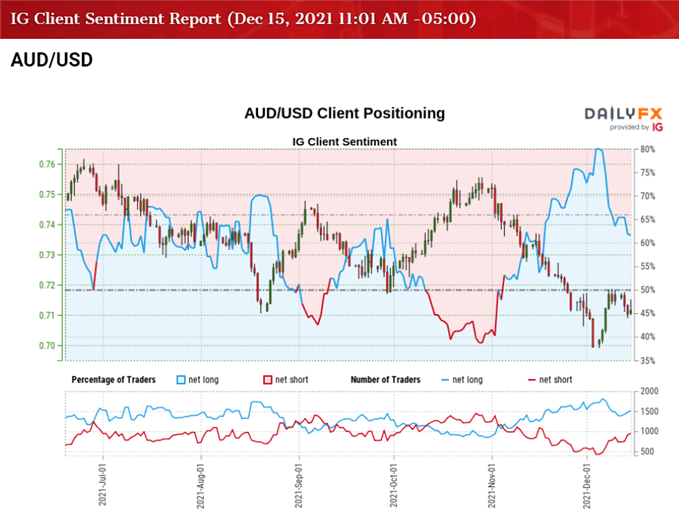 The IG Client Sentiment report shows 62.75% of traders are currently net-long AUD/USD, with the ratio of traders long to short standing at 1.68 to 1.

The number of traders net-long is 1.34% lower than yesterday and 8.51% lower from last week, while the number of traders net-short is 6.82% lower than yesterday and 20.72% higher from last week. The decline in net-long position comes as AUD/USD trades near the weekly low (0.7090), while the jump in net-short interest has helped to curb the tilt in retail sentiment as 64.61% of traders were net-long the pair last week.

With that said, a material rebound in Australia Employment may keep AUD/USD within the weekly range, but the diverging paths between the RBA and FOMC may keep the exchange rate under pressure as market participants prepare for higher US interest rates in 2022.