USD/CAD appears to be on track to test the September high (1.2896) as Federal Reserve Chairman Jerome Powell adopts a hawkish outlook, and recent developments in the Relative Strength Index (RSI) indicate a further appreciation in the exchange rate as the oscillator climbs above 70 to push into overbought territory.

USD/CAD trades near the weekly high (1.2837) following the kneejerk reaction to the ISM Manufacturing survey, and the exchange rate may continue to appreciate over the coming days as signs of a robust recovery puts pressure on the Federal Open Market Committee (FOMC) to implement a rate hike sooner rather than later. 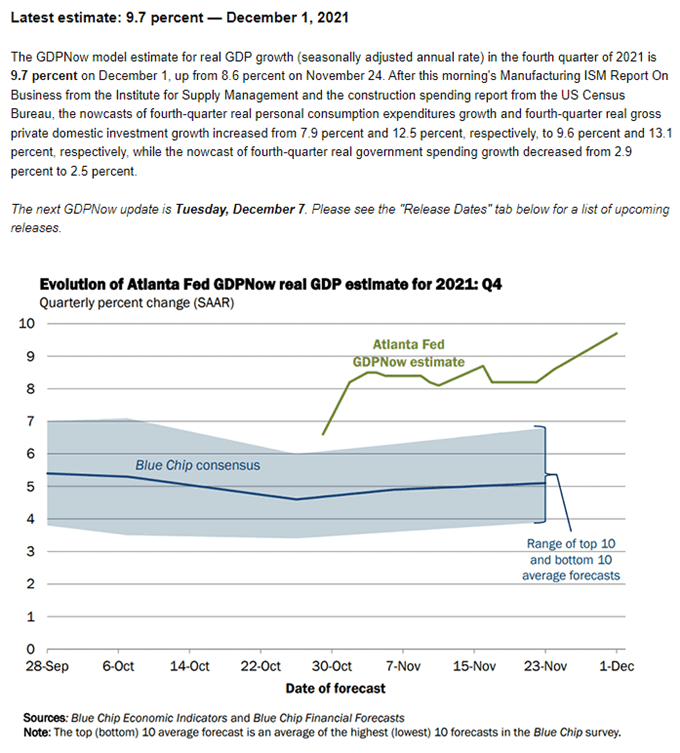 According to the Atlanta Fed, the “GDPNow model estimate for real GDP growth (seasonally adjusted annual rate) in the fourth quarter of 2021 is 9.7 percent on December 1, up from 8.6 percent on November 24,” and it remains to be seen if the FOMC will adjust its exit strategy for 2022 as Chairman Powell and Co. are slated to update the Summary of Economic Projections (SEP) at its next interest rate decision on December 15.

Until then, the Canadian Dollar may continue to underperform against its US counterpart as the Bank of Canada (BoC) insists that “the economy continues to require considerable monetary policy support” after concluding its quantitative easing (QE) program in October, but a further appreciation in USD/CAD may lead to a flip in retail sentiment like the behavior seen earlier this year. 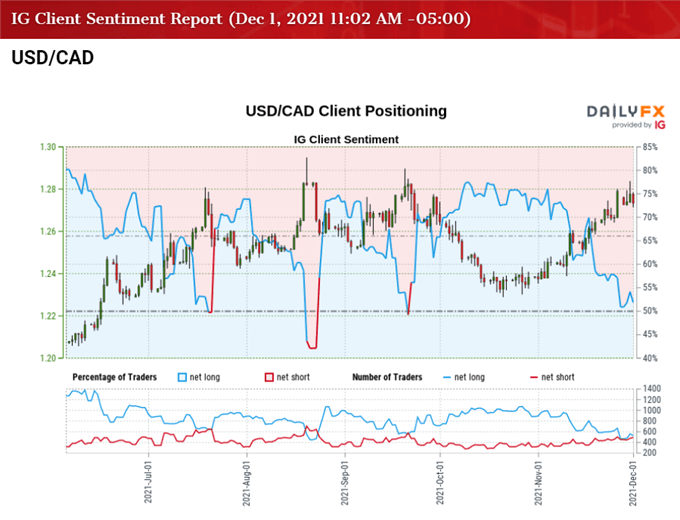 The IG Client Sentiment report shows 53.90% of traders are currently net-long USD/CAD, with the ratio of traders long to short standing at 1.17 to 1.

The number of traders net-long is 10.38% higher than yesterday and 17.88% lower from last week, while the number of traders net-short is 4.84% lower than yesterday and 9.11% higher from last week. The decline in net-long position comes as USD/CAD trades near the weekly high (1.2837), while the rise in net-short interest has alleviated the crowding behavior seen since late-September as 63.80% of traders were net-long the pair last week.

With that said, USD/CAD may attempt to test the September high (1.2896) as the Relative Strength Index (RSI) pushes into overbought territory, and the bullish price action in the exchange rate is likely to persist as long as the oscillator holds above 70.