EUR/USD struggles to hold its ground as Federal Reserve Chairman Jerome Powell strikes a hawkish tone in front of US lawmakers, but the exchange rate may stage a larger recovery over the coming days as the Relative strength Index (RSI) bounces back from oversold territory to indicate a textbook buy signal.

EUR/USD traded to a fresh weekly high (1.1373) as unemployment in Germany narrows 34.0K in November, and it remains to be seen if the data prints will influence the European Central Bank (ECB) as the headline reading for Euro Area inflation widens for the fifth consecutive month.

The Euro Area Consumer Price Index (CPI) climbed to 4.9% from 4.1% in November, with the core rate of inflation rising to 2.6% during the same period to mark the highest reading since the data series began in 1997. Record high price growing may limit the ECB’s scope to respond to the renewed COVID-19 restrictions in Europe as President Christine Lagarde expects inflation to “increase further until the end of the year,” and the Governing Council may retain the current policy at its last meeting for 2021 in an effort to achieve its one and only mandate for price stability.

As a result, EUR/USD may stage a larger recovery ahead of the next ECB rate decision on December 16 as the ECB acknowledges that “inflation will take longer to decline than previously expected,” but the deviating paths between the Governing Council and Federal Open Market Committee (FOMC) may continue to drag on the exchange rate as Chairman Powell warns that “inflation is running well above our 2% longer run goal.”

In turn, Chairman Powell recognizes that “price increases have spread much more broadly in the recent few months across the economy,” with the central bank head going onto say that “it’s a good time to retire” the term ‘transitory’ while testifying in front of Congress.

The comments suggest the Omicron variant will do little to detail the Fed from carrying out its exit strategy as Chairman Powell pledges to “use our tools to make sure that higher inflation does not become entrenched,” but the rebound from the monthly low (1.1186) has helped to alleviate the crowding behavior in EUR/USD like the behavior seen earlier this year. 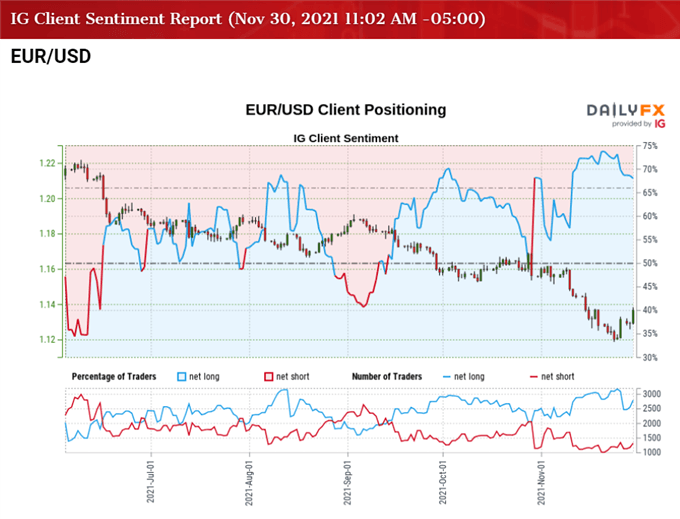 The number of traders net-long is 7.66% lower than yesterday and 16.29% lower from last week, while the number of traders net-short is 8.05% higher than yesterday and 9.98% higher from last week. The decline in net-long interest has helped to alleviate the tilt in retail sentiment as 72.08% of traders were net-long EUR/USD last week, while the rise in net-short position comes as the rebound from the monthly low (1.1186) appears to be a correction in the broader trend.

With that said, EUR/USD may continue to exhibit a bearish trend in December amid the deviating paths between the ECB and FOMC, but the exchange rate may stage a larger recovery over the coming days as the Relative strength Index (RSI) bounces back from oversold territory to indicate a textbook buy signal.