USD/JPY trades to a fresh 2021 high (115.15) to largely track the rise in longer-dated US Treasury yields, and the bullish price action may persist over the remainder of the week as a growing number of Federal Reserve officials show a greater willingness to implement a rate hike sooner rather than later.

USD/JPY appears to be on track to test the March 2017 high (115.50) as its extends the series of higher highs and lows from earlier this week, and fresh data prints coming out of the economy may keep the exchange rate afloat as US Durable Goods Orders are expected to rebound 0.2% in October.

At the same time, the Core Personal Consumption Expenditure (PCE) Price Index, the Fed’s preferred gauge for inflation, is seen widening to 4.1% from 3.6% per annum in September, which would mark the highest reading since 1991, and the data prints may overshadow the Federal Open Market Committee (FOMC) Minutes as Atlanta Fed President Raphael Bostic acknowledges that “there’re good arguments to be made that we really should considering how fast we execute the taper.”

As a result, President Bostic, who votes on the FOMC this year, argues that “a faster taper would certainly give us more optionality as we move into 2022,” and goes onto say that “we will act as necessary to make sure that inflation doesn’t become the spiral that becomes very difficult to control” during an interview with Bloomberg News.

It remains to be seen if the FOMC will respond to the fresh data prints as Chairman Jerome Powell and Co. are slated to update the Summary of Economic (SEP) at their last meeting for 2021, but the deviating paths between the Fed and Bank of Japan (BoJ) may instills a bullish outlook as longer-dated Treasury yields appear to be on track to retrace the decline from earlier this year.

In turn, USD/JPY may continue to trade fresh yearly highs in November as it breaks out of a bull flag formation, but a further advance in the exchange rate may fuel the tilt in retail sentiment like the behavior seen earlier this year. 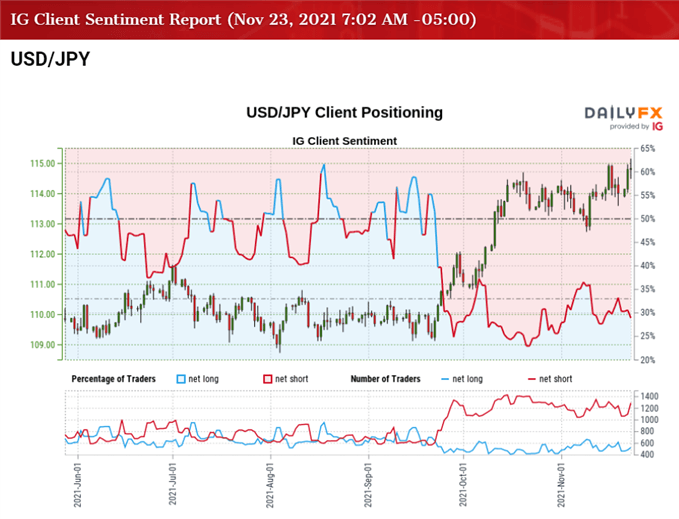 The IG Client Sentiment report shows 31.65% of traders are currently net-long USD/JPY, with the ratio of traders short to long standing at 2.16 to 1.

The number of traders net-long is 1.68% higher than yesterday and 6.03% lower from last week, while the number of traders net-short is unchanged than yesterday and 12.62% lower from last week. The crowding behavior persist amid the decline in net-long interest as 31.37% of traders were net-long USD/JPY last week, while the decline in net-short position comes as the exchange rate trades to a fresh yearly high (115.15).

With that said, USD/JPY may continue to reflect a bullish trend ahead of the next Fed rate decision on December 15 as the central bank appears to be on track to implement higher interest rates in 2022, and the exchange rate looks poised to test the March 2017 high (115.50) as its extends the series of higher highs and lows from earlier this week.