USD/JPY carved a bearish outside day candle as it pulled back from a fresh yearly high (114.97), but the exchange rate may continue to appreciate over the coming days as it breaks out of a bull flag formation.

USD/JPY appears to be defending the weekly low (113.75) amid a rebound in longer-dated US Treasury yield, and the move above the November 2017 high (114.74) may push the exchange rate towards the March 2017 high (115.50) as the better-than-expected US Retail Sales report puts pressure on the Federal Reserve to implement higher interest rates sooner rather than later.

Indications of a robust recovery should keep the FOMC on track to remove monetary stimulus as the US Consumer Price Index (CPI) climbs to its highest level since 1990, and it remains to be seen if the Federal Open Market Committee (FOMC) will adjust the forward guidance at its next interest rate decision on December 15 as the central bank is slated to update the Summary of Economic Projections (SEP).

Until then, the US Dollar may continue to appreciate against its Japanese counterpart as the Bank of Japan (BoJ) sticks to its Quantitative and Qualitative Easing (QQE) Program with Yield-Curve Control (YCC), but a further advance in the exchange rate may continue to fuel the tilt in retail sentiment like the behavior seen earlier this year. 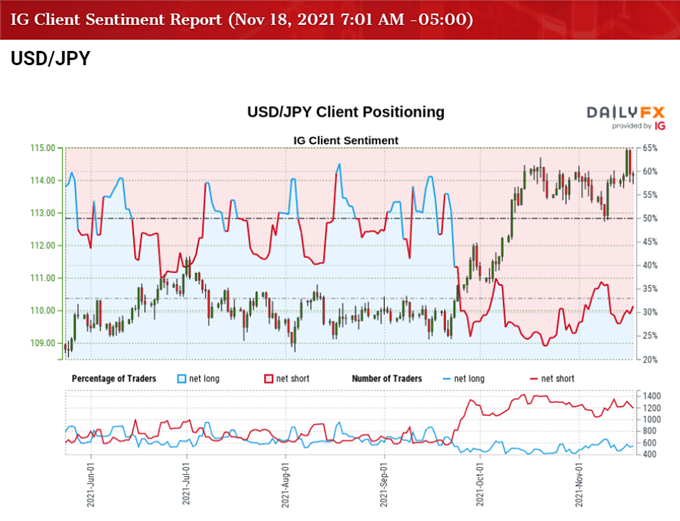 The IG Client Sentiment report shows 31.37% of traders are currently net-long USD/JPY, with the ratio of traders short to long standing at 2.19 to 1.

The number of traders net-long is 5.42% lower than yesterday and 1.09% higher from last week, while the number of traders net-short is 6.44% lower than yesterday and 4.24% lower from last week. The rise in net-long interest has done little to alleviate the crowding behavior as 34.37% of traders were net-long USD/JPY last week, while the decline in net-long position could be a function of stop-loss orders getting triggered as the exchange rate trades to a fresh yearly high (114.97) in November.

With that said, the diverging paths between the FOMC and BoJ may keep USD/JPY afloat as a growing number of Fed officials show a greater willingness to deliver a rate hike in 2022, and the exchange rate may continue to push to fresh 2021 highs throughout the remainder of the year as speculation for higher interest rates lifts US yields.