USD/CAD continues to pullback from a fresh monthly high (1.2605) on the back of US Dollar weakness, and fresh data prints coming out of Canada may keep the exchange rate under pressure as the Consumer Price Index (CPI) is expected to widen for the fourth consecutive month.

USD/CAD appeared to be on track to test the October high (1.2739) as the bear flag formation carried over from last month failed to materialize, and the exchanged rate may continue trade to fresh 2021 highs over the remainder of the year as the Bank of Canada (BoC) insists that “the economy continues to require considerable monetary policy support.”

It seems as though the BoC is in no rush to implement higher interest rates as the central bank pledges to “provide the appropriate degree of monetary policy stimulus” after ending its quantitative easing (QE) program in October, but indications of stronger price growth may fuel a larger pullback in USD/CAD as it puts pressure on Governor Tiff Macklem and Co. to deliver a rate hike sooner rather than later.

The update to Canada’s CPI may generate a bullish reaction in the Canadian Dollar as the headline reading is anticipated to increase to 4.7% from 4.4% in September, which would mark the highest reading since 1991.

As a result, USD/CAD may continue to pullback from the monthly high (1.2605) as it carves a series of lower highs and lows, but further decline in the exchange rate may continue to alleviate the tilt in retail sentiment like the behavior seen earlier this year. 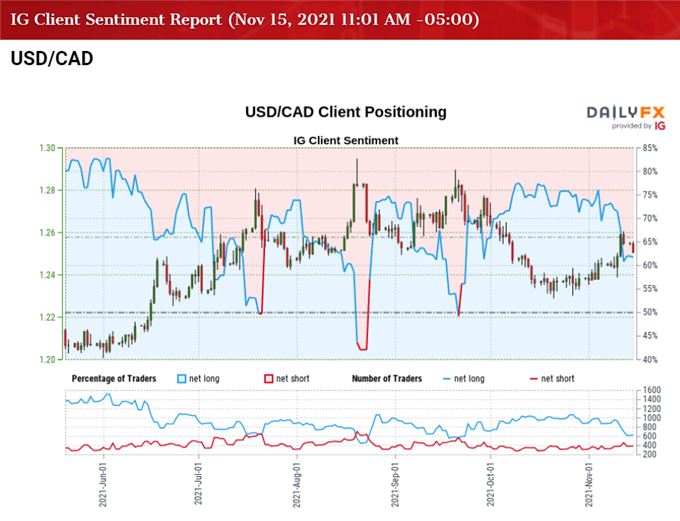 The IG Client Sentiment report shows 63.80% of traders are currently net-long USD/CAD, with the ratio of traders long to short standing at 1.76 to 1.

The number of traders net-long is 11.26% higher than yesterday and 25.95% lower from last week, while the number of traders net-short is 2.65% higher than yesterday and 4.31% higher from last week. The decline net-long interest has helped to alleviate the tilt in retail sentiment as 70.26% of traders were net-long USD/CAD last week, while the rise in net-short position comes as the exchange rate continue to pullback from the monthly high (1.2605).

With that said, USD/CAD may trade continue trade to fresh 2021 highs over the remainder of the year as the bear flag formation unravels, but the update to Canada’s CPI may fuel a larger pullback in the exchange rate if it puts pressure on the BoC to implement higher interest rates.