NZD/USD fails to defend the range bound price action from the previous week as it gives back the advance from the start of the month, and fresh data prints coming out of New Zealand may keep the exchange rate under pressure as job growth is expected to slowdown in the third quarter of 2021.

NZD/USD appears to be reversing course after failing to test the October high (0.7219) during the previous week, and the Relative Strength Index (RSI) may continue to show the bullish momentum abating as it continues to fall back from overbought territory.

At the same time, New Zealand’s Employment report may drag on the exchange rate as the update is anticipated to show job growth increasing 0.4% after expanding 1.0% in the three-months through June, while the jobless rate is expected to narrow to 3.9% from 4.0% during the same period.

Signs of a slowing recovery may encourage the Reserve Bank of New Zealand (RBNZ) to revert to a wait-and-see approach after delivering a dovish rate hike at the October meeting, and the central bank may keep the official cash rate (OCR) at 0.50% following its first meeting in 2022 as “the economy is expected to have contracted sharply as a result of the recent COVID-related restrictions.”

As a result, it seems as though the RBNZ will take a gradual approach in normalizing monetary policy as “employment is expected to remain at around its maximum sustainable level,” and Governor Adrian Orr and Co. may continue to prepare New Zealand households and businesses for higher interest rates as “monetary policy stimulus will need to be reduced to maintain price stability and maximum sustainable employment over the medium term.”

In turn, the recent weakness in NZD/USD may end up being short-lived if the Federal Reserve stays on track to “increase its holdings of Treasury securities by at least $80 billion per month and of agency mortgage‑backed securities by at least $40 billion per month,” but a further advance in the exchange rate may fuel the tilt in retail sentiment like the behavior seen earlier this year. 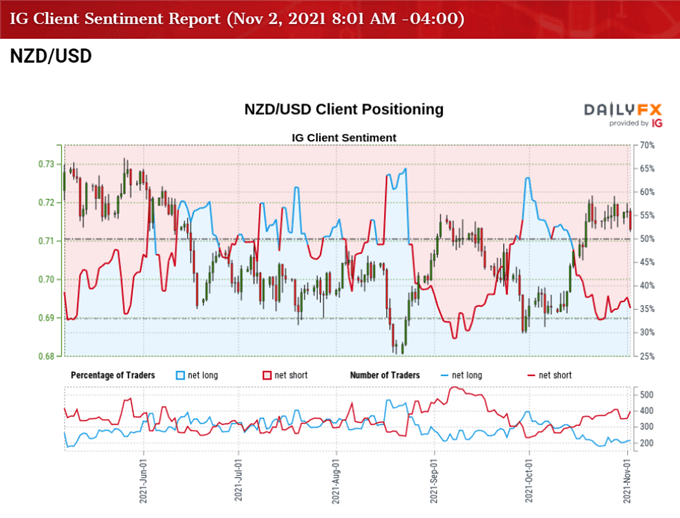 The IG Client Sentiment report shows only 35.83% of traders are currently net-long NZD/USD, with the ratio of traders short to long standing at 1.79 to 1.

The number of traders net-long is 6.11% lower than yesterday and 4.87% lower from last week, while the number of traders net-short is 2.94% higher than yesterday and 4.70% lower from last week. The decline in net-long position comes as NZD/USD struggles to defend the range bound price action from the previous week, while the decline in net-short interest has done little to alleviate the tilt in retail sentiment as 38.73% of traders were net-long the pair last week.

With that said, NZD/USD may face headwinds ahead of the Fed rate decision on November 3 as New Zealand’s employment report is anticipated to show a slowdown in job growth, and the failed attempt to test the October high (0.7219) may generate a larger pullback in the exchange rate as the Relative Strength Index (RSI) continues to fall back from overbought territory.