USD/JPY Correction to Persist Amid Weakness in US Treasury Yields

USD/JPY gives back the advance from the start of the week amid the recent weakness in longer-dated US Treasury yields, and the exchange rate may face a larger pullback over the remainder of the month as the Relative Strength Index (RSI) continues to fall back from overbought territory.

USD/JPY Correction to Persist Amid Weakness in US Treasury Yields

USD/JPY tags a fresh weekly low (113.39) following the limited reaction to the smaller-than-expected decline in US Durable Goods Orders, and the exchange rate may continue to consolidate ahead of the Federal Reserve interest rate decision on November 3 as the 10-Year Treasury yield weakens for the fourth consecutive day.

It remains to be seen if the recent US data prints will influence the Federal Open Market Committee (FOMC) as demand for large-ticket items contracts 0.4% in September versus projections for a 1.1% decline, but indications of a less robust recovery may generate a larger correction in USD/JPY as the update to the Gross Domestic Product (GDP) report is anticipated to show the growth rate rising 2.7% after expanding 6.7% in the second quarter of 2021.

As a result, a marked slowdown in the US economy may produce headwinds for the Dollar as it puts pressure on the Fed to delay its exit strategy, but a positive development may generate a bullish reaction in USD/JPY as the FOMC plans to scale back is purchases of Treasury securities and mortgage-back securities (MBS) later this year.

In turn, the pullback from the monthly high (114.70) may turn out to be a correction in the broader trend amid the deviating paths between the Fed and Bank of Japan (BoJ), but a further decline in USD/JPY may continue to alleviate the tilt in retail sentiment like the behaver seen earlier this year. 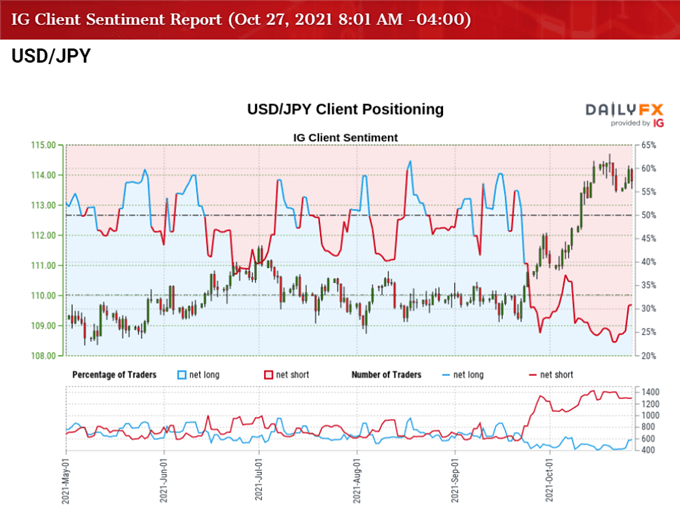 The IG Client Sentiment report shows 27.68% of traders are currently net-long USD/JPY, with the ratio of traders short to long standing at 2.61 to 1.

With that said, USD/JPY may continue to consolidate ahead of the next Fed rate decision amid the weakness in longer-dated US yields, and recent developments in the Relative Strength Index (RSI) raises the scope for a further decline in the exchange rate as the indicator falls back from overbought territory to reflect a textbook sell signal.