AUD/USD extends the advance from the start of the month as the Reserve Bank of Australia (RBA) Minutes warn of rising home prices, and looming developments in the Relative Strength Index (RSI) may show the bullish momentum gathering pace if the oscillator pushes into overbought territory.

The weaker-than-expected Australia Employment report has done little to derail the rally in AUD/USD as it climbs to a fresh monthly high (0.7476), and the exchange rate appears to be on track to test the September high (0.7478) even as the RBA acknowledges that the “available data pointed to a material decline in GDP in the September quarter.”

As a result, it seems as though the RBA will retain a dovish forward guidance as the economy is expected to return to “its pre-Delta path in the second half of 2022,” but the minutes from the September meeting suggest the central bank is becoming concerned about level of monetary support as “housing prices and credit growth had continued to rise strongly at a time of historically low interest rates.”

Nevertheless, the RBA insists that “while less accommodative monetary policy would, all else equal, see lower housing prices and credit growth, it would result in fewer jobs and lower wages growth, which would in turn create further distance from the goals of monetary policy,” and the transcript suggests Governor Philip Lowe and Co. are in no rush to switch gears as “the Board remained committed to maintaining highly supportive monetaryconditions to achieve a return to full employment in Australia and inflation consistent with the target.”

In turn, the Australian Dollar may face headwinds ahead of the next RBA meeting on November 2 as the Federal Reserve lays out a tentative exit strategy, but a further advance in AUD/USD may fuel the recent flip in retail sentiment like the behavior seen earlier this year. 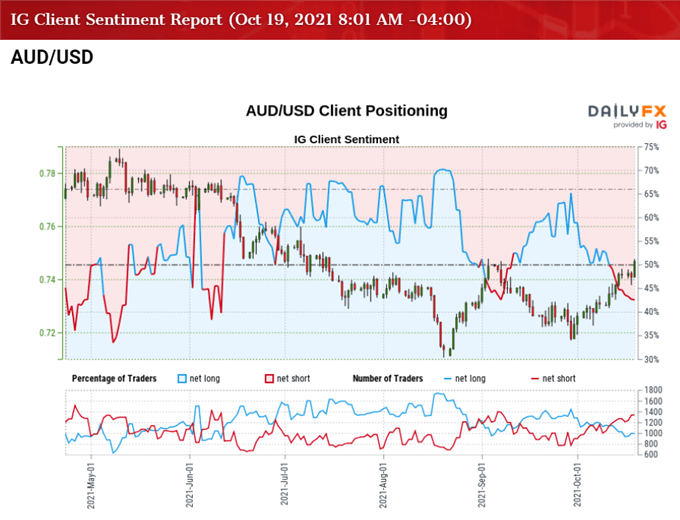 The IG Client Sentiment report shows 41.92% of traders are currently net-long AUD/USD, with the ratio of traders short to long standing at 1.39 to 1.

The number of traders net-long is 3.69% lower than yesterday and 21.10% lower from last week, while the number of traders net-short is 0.96% lower than yesterday and 14.08% higher from last week. The decline in net-long position could be a function of profit taking behavior as AUD/USD trades to a fresh monthly high (0.7476), while the rise in net-short interest has fueled the flip in retail sentiment as 47.99% of traders were net-long the pair last week.

With that said, looming price action may indicate a larger correction in AUD/USD if the Relative Strength Index (RSI) breaks above 70 for the first time since February, but lack of momentum to clear the September high (0.7478).