NZD/USD appears to be stuck in a narrow range following the dovish rate hike from the Reserve Bank of New Zealand (RBNZ), and the exchange rate may continue to consolidate over the remainder of the week as it fails to clear the opening range for October.

NZD/USD bounces back from a fresh weekly low (0.6912) as the initial reaction to the US Consumer Price Index (CPI) unravels, but the fresh data prints may keep a lid on the exchange rate as signs of sticky inflation puts pressure on the Federal Reserve to deploy its exit strategy sooner rather than later.

As a result, it remains to be seen if the Federal Open Market Committee (FOMC) Minutes will reveal anything new as “the Committee judges that a moderation in the pace of asset purchases may soon be warranted,” and the transcript may also generate a limited reaction as “participants generally view that, so long as the recovery remains on track, a gradual tapering process that concludes around the middle of next year is likely to be appropriate.”

However, Chairman Jerome Powell and Co. may react to the stickiness in inflation as the headline CPI reading climbs to 5.4% from 5.3% per annum in August while the core rate holds steady at 4.0% for the second month, and the FOMC Minutes may fuel speculation for an imminent shift in Fed policy as the bottleneck effects caused by the pandemic “have been larger and longer lasting than anticipated, leading to upward revisions to participants inflation projections for this year.”

In turn, the rebound from the August low (0.6805) may turn out to be a correction in the broader trend as the weaker-than-expected Non-Farm Payrolls (NFP) report is unlikely to derail the FOMC from tapering its purchases of Treasury securities and mortgage-backed securities (MBS), but the range bound price action in NZD/USD generated a flip in retail sentiment like the behavior seen earlier this year. 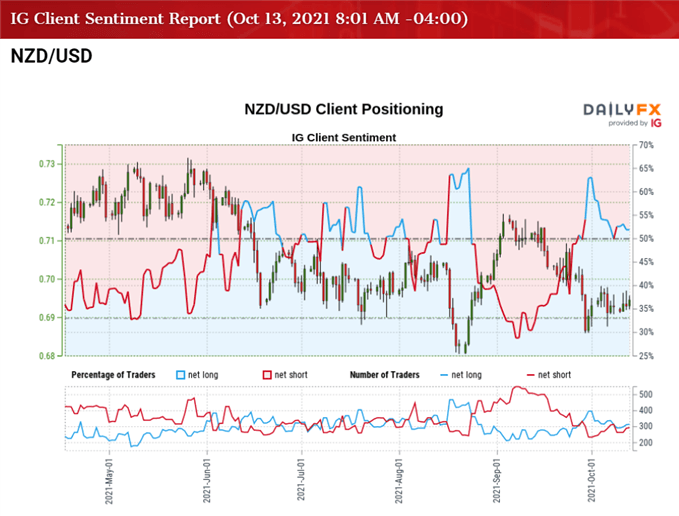 The IG Client Sentiment report shows 50.64% of traders are currently net-long NZD/USD, with the ratio of traders long to short standing at 1.03 to 1.

The number of traders net-long is 0.64% higher than yesterday and 7.60% lower from last week, while the number of traders net-short is 1.28% lower than yesterday and 3.75% lower from last week. The decline in net-long interest comes as NZD/USD slips to a fresh weekly low following the stronger-than-expected US CPI print, while the drop in net-short position has helped to fuel a flip in retail sentiment as 48.35% of traders were net-long the pair last week.

With that said, NZD/USD may trade within a defined range ahead of the next FOMC interest rate decision on November 3 as it fails to clear the opening range for October, but the August low (0.6805) may turn out to be a correction in the broader trend as the Fed prepares to switch gears.