USD/JPY trades to a fresh monthly (110.57) amid the pickup in longer-dated US Treasury yields, and the exchange rate may stage a larger advance over the coming days as it extends the series of higher highs and lows from earlier this week.

USD/JPY clears the opening range for September even though the Federal Reserve retains the current course for monetary policy as the central bank unveils a tentative timeline to taper its purchases of Treasury securities and mortgage-backed securities.

It seems as though it will only be a matter of time before the Federal Open Market Committee (FOMC) switches gears as Chairman Jerome Powell reveals that “a gradual tapering process that concludes around the middle of next year is likely to be appropriate,” and speculation for an imminent shift in Fed policy may keep USD/JPY afloat as the Bank of Japan (BoJ) shows little interest in scaling back monetary support.

In turn, the deviating paths between the FOMC and BoJ may lead USD/JPY to further retrace the decline from the yearly high (111.66), but the recovery in the exchange rate may fuel the recent flip in retail sentiment like the behavior seen earlier this year. 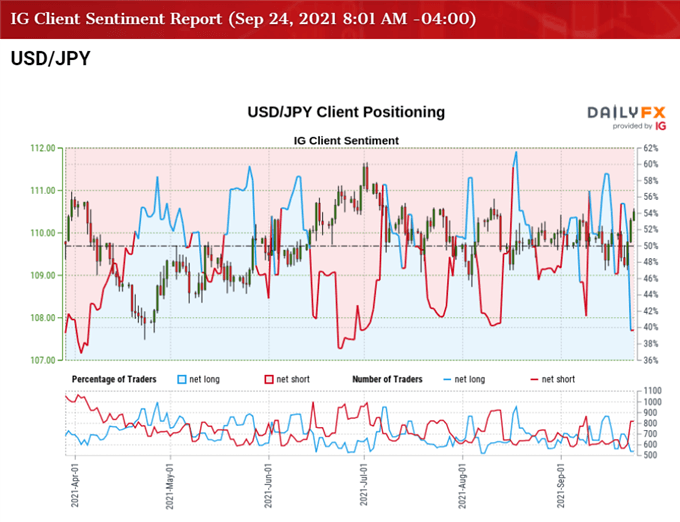 The IG Client Sentiment report shows only 36.11% of traders are currently net-long USD/JPY, with the ratio of traders short to long standing at 1.77 to 1.

The number of traders net-long is 21.75% lower than yesterday and 27.10% lower from last week, while the number of traders net-short is 29.33% higher than yesterday and 36.56% higher from last week. The decline in net-long interest could be a function of profit taking behavior as USD/JPY trades to a fresh monthly high (110.57), while the jump in net-short position has fueled the flip in retail sentiment as 51.43% of traders were net-long the pair last week.

With that said, USD/JPY may continue to retrace the decline from the yearly high (111.66) as it clears the opening range for September, and the exchange rate may stage a larger advance over the remainder of the month as it extends the series of higher highs and lows from earlier this week.