NZD/USD extends the decline following the Reserve Bank of New Zealand (RBNZ) interest rate decision on the back of US Dollar strength, and recent price action indicates a further decline in the exchange rate as it extends the series of lower highs and lows from the start of the month.

NZD/USD has taken out the July low (0.6881) as the RBNZ kept the official cash rate (OCR) at the record-low of 0.25%, and the New Zealand Dollar may continue to depreciate against its US counterpart as a growing number of Federal Reserve officials show a greater willingness to switch gears.

In contrast, the renewed lockdowns across Asia/Pacific may keep the RBNZ on the sidelines as “the need to reinstate COVID-19 containment measures in some regions highlights the serious health and economic risks posed by the virus,” and the central bank may stick to the same script at its next meeting on October 6 as “the Committee remains alert to the supply disruptions that COVID-19 can create.”

Nevertheless, it seems as though it will be a matter of time before the RBNZ normalizes monetary policy as Governor Adrian Orr and Co. acknowledge that “New Zealand economy had rebounded more strongly than most countries,” and the central bank appears to be on track to lift the OCR off of the record-low as “the Committee agreed that their least regrets policy stance is to further reduce the level of monetary stimulus.”

Until then, NZD/USD may continue to give back the advance from the November 2020 low (0.6589) as it out the July low (0.6881), but a further decline in the exchange rate may fuel the recent flip in retail sentiment like the behavior seen earlier this year. 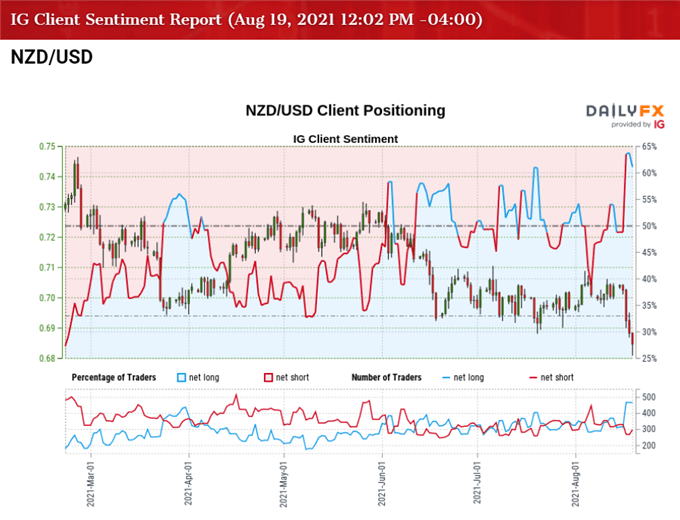 The IG Client Sentiment report shows 60.80% of traders are currently net-long NZD/USD, with the ratio of traders long to short standing at 1.55 to 1.

The number of traders net-long is 4.89% lower than yesterday and 18.89% higher from last week, while the number of traders net-short is 12.10% lower than yesterday and 14.55% lower from last week. The rise in net-long position has fueled the shift in retail sentiment as 45.78% of traders were net-long NZD/USD last week, while the decline in net-short position could be a function of profit-taking behavior as the exchange rate trades to a fresh yearly low (0.6809).

With that said, recent price actionindicates a further decline in NZD/USD as it extends the series of lower highs and lows from the start of the month, and looming developments in the Relative Strength Index (RSI) may indicate a further decline in the exchange rate if the oscillator pushes into oversold territory for the second time in 2021.