AUD/USD extends the advance following the Reserve Bank of Australia (RBA) interest rate decision to mark the first three-day rally since June, and the exchange rate may stage a larger recovery ahead of the US Non-Farm Payrolls (NFP) report as it extends the series of higher highs and lows from the start of the week.

AUD/USD trades near the weekly high (0.7425) as the ADP Employment report shows a 330K rise in July versus forecasts for a 695K expansion, and the exchange rate may continue to retrace the decline from the previous month if the updated NFP figures also reflect a slower-than-expected pickup in job growth.

Lackluster data prints coming out of the US economy may continue to drag on the US Dollar as it encourages the Federal Reserve to retain the current course for monetary policy, and the central bank may continue to carry out a wait-and-see approach as Chairman Jerome Powell and Co. brace for a transitory rise in inflation.

Until then, the Greenback may face headwinds as Governor Lael Brainard, a permanent voting-member on the Federal Open Market Committee (FOMC), acknowledges that “employment has some distance to go,” but a further recover in AUD/USD may lead to a shift in retail sentiment like the behavior seen earlier this year. 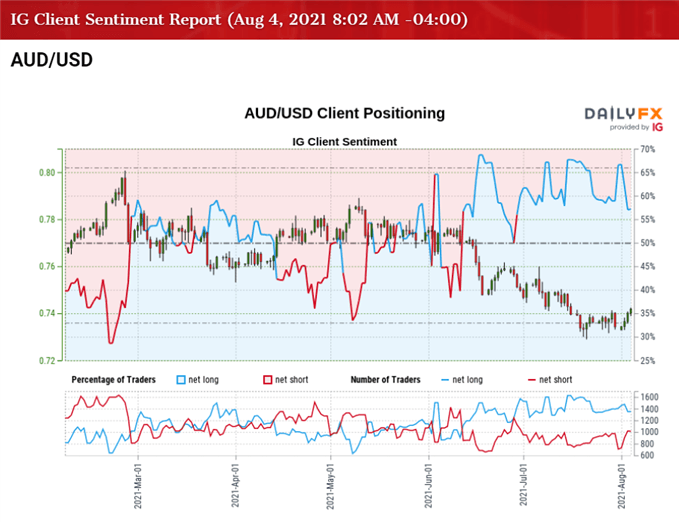 The IG Client Sentiment report shows 55.99% of traders are currently net-long AUD/USD, with the ratio of traders long to short standing at 1.27 to 1.

The number of traders net-long is 7.19% lower than yesterday and 6.17% lower from last week, while the number of traders net-short is 5.70% higher than yesterday and 9.35% higher from last week. The decline in net-long interest has alleviated the crowding behavior as 61.73% of traders were net-long AUD/USD last week, while the rise in net-short position comes as the exchange rate extends the series of higher highs and lows from the start of the week.

With that said, the decline from the February high (0.8007) may turn out to be a change in the broader trend as AUD/USD slipped to a fresh yearly low (0.7410) in July, but recent developments in the Relative Strength Index (RSI) indicate a larger recovery in the exchange rate as the oscillator breaks out of the downward trend from earlier this year.