EUR/USD is on the cusp of testing the monthly high (1.1895) following the lackluster US Gross Domestic Product (GDP) report, and the exchange rate may stage a larger recovery going into the end of the month as the Euro Area is expected to recover from a technical recession.

EUR/USD appears to have reversed course ahead of the March low (1.1704) as it marks the first four-day rally since May, and the slew of data prints on tap for the remainder of the week may sway the exchange rate as the Euro-Zone is expected to grow 1.5% after contracting for two consecutive quarters.

An upbeat Euro Zone GDP report may fuel the recent rebound in EUR/USD as it puts pressure on the European Central Bank (ECB) to switch gears, and the Governing Council may gradually change its tone over the coming months as the central bank anticipates “economic activity to return to its pre-crisis level in the first quarter of next year.”

Until then, EUR/USD may continue to track the yearly range as the ECB expects “purchases under the pandemic emergency purchase programme (PEPP) over the current quarter to be conducted at a significantly higher pace than during the first months of the year,” and it remains to be seen if the update to the US Core Personal Consumption Expenditure (PCE), the Fed’s preferred gauge for inflation, will influence the exchange rate as the Federal Open Market Committee (FOMC) retains the current course for monetary policy.

Nevertheless, recent price action raises the scope for a larger recovery in EUR/USD as its appears to have reversed course ahead of the March low (1.1704), but a further rebound in the exchange rate may lead to a shift in retail sentiment like the behavior seen earlier this year. 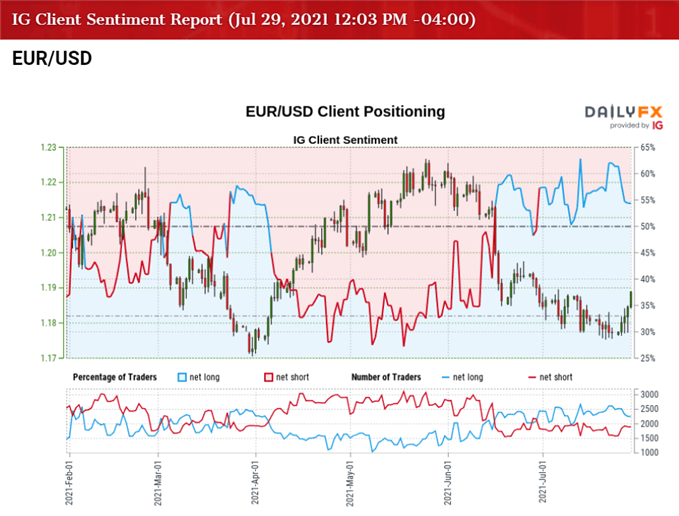 The IG Client Sentiment report shows 51.18% of traders are currently net-long EUR/USD, with the ratio of traders long to short standing at 1.05 to 1.

The number of traders net-long is 13.01% lower than yesterday and 9.95% lower from last week, while the number of traders net-short is 20.82% higher than yesterday and 16.70% higher from last week. The decline in net-long position could be a function of profit-taking behavior going into the end of the month, while the rise in net-short interest as alleviated the crowding behavior from earlier this month as 58.06% of traders were net-long EUR/USD last week.

With that said, EUR/USD appears to be on pace to test the monthly high (1.1895) as it marks the first four-day rally since May, and recent developments in the Relative Strength Index (RSI) indicates a further advance in the exchange rate as the oscillator breaks out of the downward trend from earlier this year.