AUD/USD defends the advance following the Federal Reserve interest rate decision as the US Gross Domestic Product (GDP) report warns of a weaker-than-expected recovery, and recent developments in the Relative Strength Index (RSI) indicate a larger recovery in the exchange rate as the oscillator breaks out of the downward trend from earlier this year.

AUD/USD remains higher for the week as the advance US GDP report shows the economy growing 6.5% in the second quarter of 2021 versus forecasts for an 8.5% print, and the exchange rate may stage a larger recovery ahead of the next Reserve Bank of Australia (RBA) interest rate decision on August 3 as the Federal Open Market Committee (FOMC) stays on track to “increase its holdings of Treasury securities by at least $80 billion per month and of agency mortgage‑backed securities by at least $40 billion per month.”

Little indications of a Fed exit strategy is likely to keep AUD/USD afloat as the central bank continues to “assess the economy’s progress toward our goals,” and it seems as though it remains to be seen if the FOMC will adjust the forward guidance at the next quarterly meeting in September as Chairman Jerome Powell pledges to “provide advance notice before making any changes to our purchases.”

As a result, looming developments coming out of the RBA are likely to influence AUD/USD as the central bank expects to complete the second A$100 billion tranche of bond purchases in early September, but the renewed lockdowns in Australia may put pressure on the central bank to further support the economy as “the Bank's central scenario implied that the conditions for an increase in the cash rate would not be met until 2024.”

In turn, more of the same from Governor Philip Lowe and Co. may produce headwinds for the Australian Dollar as “the Board remains committed to maintaining highly supportive monetary conditions to support a return to full employment in Australia and inflation consistent with the target,” and a bearish reaction in AUD/USD may fuel the recent shift in retail sentiment like the behavior seen earlier this month. 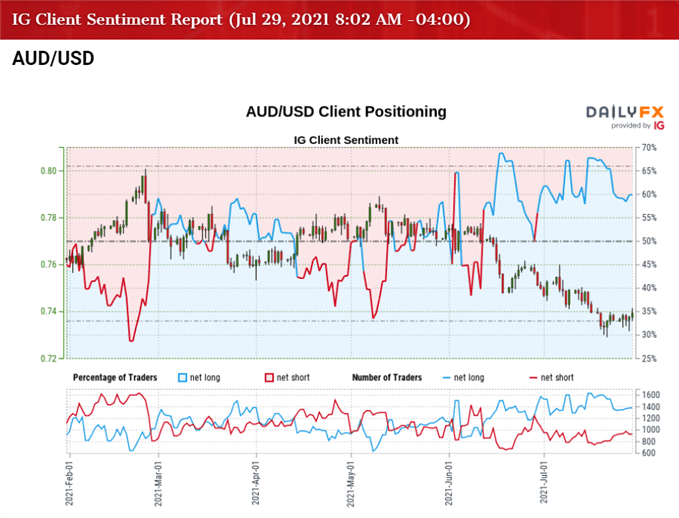 The IG Client Sentiment report shows 61.73% of traders are currently net-long AUD/USD, with the ratio of traders long to short standing at 1.61 to 1.

The number of traders net-long is 2.06% lower than yesterday and 7.57% lower from last week, while the number of traders net-short is 9.96% lower than yesterday and 0.23% higher from last week. The decline in net-long position could be a function of profit-taking behavior as AUD/USD defends the advance following the Fed rate decision, while the marginal rise in net-short interest has done little to alleviate the crowding behavior as 60.97% of traders were net-long the pair on July 14.

With that said, the decline from the February high (0.8007) may turn out to be a change in the broader trend as AUD/USD trades to a fresh yearly low (0.7410) in July, but the exchange rate may continue to defend the advance following the Fed rate decision as the Relative Strength Index (RSI) breaks out of the downward trend established in May.