AUD/USD trades to a fresh yearly low (0.7417) following the Reserve Bank of Australia (RBA) interest rate decision as Governor Philip Lowe defends the dovish forward guidance for monetary policy, and a move below 30 in the Relative Strength Index (RSI) is likely to be accompanied by a further decline in the exchange rate like the behavior seen during the previous month.

AUD/USD extends the series of lower highs and lows from earlier this week as RBA Governor Lowe discloses that “it is likely that the unemployment rate will need to be sustained in the low 4s for the Australian economy to be considered to be operating at full employment” while speaking at an event held by the Economic Society of Queensland.

As a result, Lowe insists that the RBA will “provide the continuing monetary support that the economy needs as it transitions from the recovery phase to the expansion phase,” with the central bank head going onto say that “we will be reviewing the size of our bond purchases again at our November meeting” as the board relies on its non-standard tools to achieve its policy targets.

The comments suggest the RBA is on a preset course as Lowe emphasizes that “we want to see results before we change interest rates,” and it seems as though the central bank will retain the current path for monetary policy at its next interest rate decision on August 3 as “it will take until 2024 for inflation to be sustainably within the 2 to 3 per cent target range.”

Until then, it remains to be seen if the decline from the February high (0.8007) will turn out to be a change in AUD/USD behavior or a correction in the broader trend amid the deviating paths between the RBA and Federal Reserve, but the recent shift in retail sentiment may coincide with a further depreciation in the Australian Dollar like the behavior seen earlier this year. 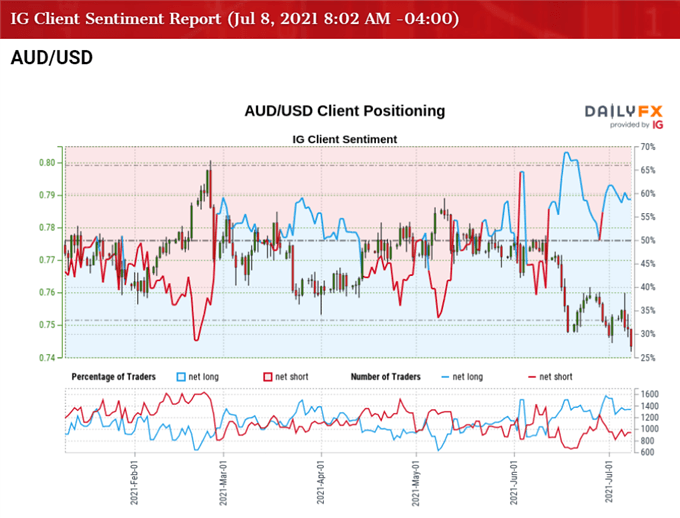 The IG Client Sentiment report shows 63.56% of traders are currently net-long AUD/USD, with the ratio of traders long to short standing at 1.74 to 1.

The number of traders net-long is 5.02% higher than yesterday and 5.80% lower from last week, while the number of traders net-short is 4.68% lower than yesterday and 11.71% lower from last week. The decline in net-long position has done little to alleviate the tilt in retail sentiment as 50.81% of traders were net-long AUD/USD last week, while the drop in net-short interest comes as the exchange rate trades to a fresh yearly low (0.7417) in July.

With that said, the weakness in AUD/USD may continue to coincide with the shift in retail sentiment like the behavior seen earlier this year, and looming developments in the Relative Strength Index (RSI) may show the bearish momentum gathering pace as it tracks the downward trend established in May and approaches oversold territory.