The recent rebound in USD/CAD appears to be stalling as it struggles to extend the series of higher highs and lows from earlier this week, but the update to the US Non-Farm Payrolls (NFP) report may keep the exchange rate afloat as employment is expected to increase for the sixth consecutive month.

USD/CAD seems to stuck in a narrow range as market participants turn their attention to the NFP report, which is now anticipated to show a 700K rise in June, while the Unemployment Rate is expected to narrow to 5.7% from 5.8% during the same period.

A further improvement in the labor market may spark a bullish reaction in the US Dollar as it puts pressure on the Federal Reserve to discuss an exit strategy, and a growing number of Fed officials may change their tone over the coming months as Richmond Fed President Thomas Barkin, who votes on the Federal Open Market Committee (FOMC) this year, recognizes that the central bank may achieve its policy targets “in short order.”

As a result, the pullback from the weekly high (1.2424) may end up being short lived as Chairman Jerome Powell and Co. forecast two rate hikes for 2023, but a weaker-than-expected NFP report may keep USD/CAD under pressure as it encourages the FOMC to retain the current policy at its next interest rate decision on July 28.

In turn, USD/CAD may face range bound conditions ahead of the NFP report as the FOMC carries out an outcome-based approach for monetary policy, but the crowing behavior carried over from last year looks poised to as traders have been net-long the pair since May 2020. 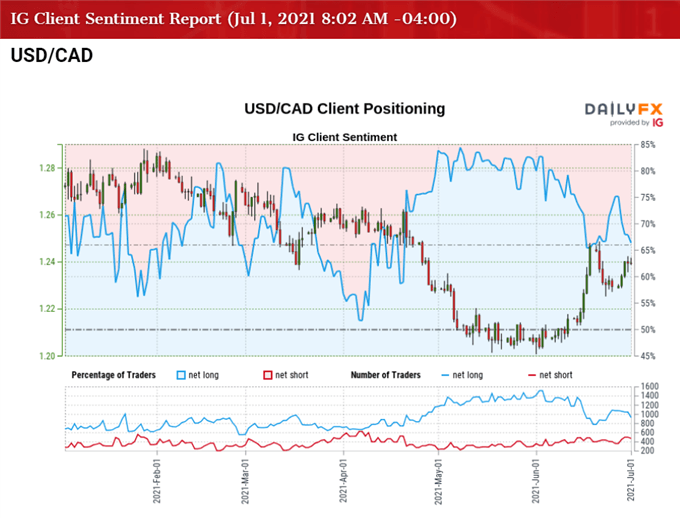 The IG Client Sentiment report shows 66.53% of traders are still net-long USD/CAD, with the ratio of traders long to short currently standing at 1.99 to 1.

The number of traders net-long is 5.89% lower than yesterday and 4.49% lower from last week, while the number of traders net-short is 1.63% lower than yesterday and 0.42% higher from last week. The decline in net-long position comes as USD/CAD struggles to extend the bullish price series from earlier this week, while the marginal rise in net-short position has helped to alleviate the crowing behavior as 69.51% of traders were net-long the pair last week.

With that said, it remains to be seen if the rebound from the yearly low (1.2007) will turn out to be a correction in the broader trend or a potential change in USD/CAD behavior amid the ongoing tilt in retail sentiment, but the exchange rate may face range bound conditions ahead of the NFP report as it struggles to extend the series of higher highs and lows from earlier this week.