USD/CAD to Stage Larger Correction on Another Overbought RSI Reading

USD/CAD attempts to retrace the decline from the start of the week even as Federal Reserve officials talk down speculation for an imminent shift in monetary policy, and the exchange rate may stage a larger correction over the remainder of the month as the Relative Strength Index (RSI) appears to be on track to indicate another overbought reading.

USD/CAD to Stage Larger Correction on Another Overbought RSI Reading

Looming developments in the RSI may show the bullish momentum gathering pace as the oscillator works its way back towards overbought territory, and a move above 70 in the indicator is likely to be accompanied a further appreciation in USD/CAD like the price action seen last year.

However, a recent speech by New York Fed President John Williams suggests the central bank is in no rush to switch gears as the permanent voting-member on the Federal Open Market Committee (FOMC) emphasizes that “conditions have not progressed enough for the FOMC to shift its monetary policy stance of strong support for the economic recovery.”

In turn, President Williams reiterates that the FOMC “will maintain its current asset purchase pace until substantial further progress has been made toward its employment and inflation goals,” and it seems as though Chairman Jerome Powell and Co. will stick to the same script at the next interest rate decision on July 28 as the central bank braces for a transitory rise in inflation.

Until then, USD/CAD may stage a larger correction as it trades above the 50-Day SMA (1.2226) for the first time since April, but the crowing behavior carried over from last year looks poised to as traders have been net-long the pair since May 2020. 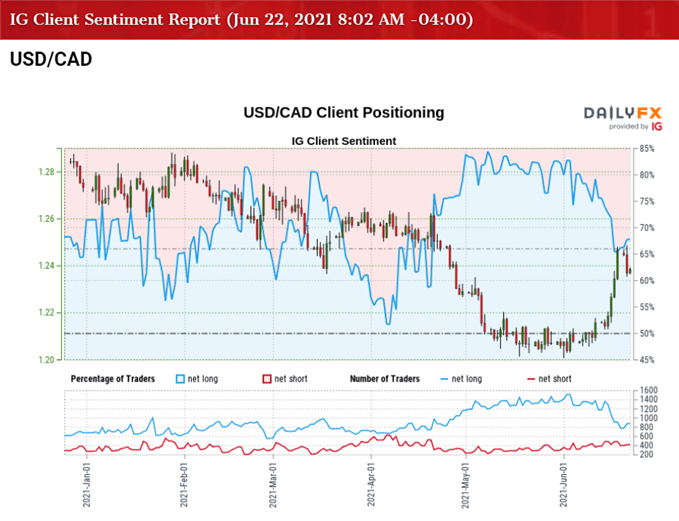 The IG Client Sentiment report shows 69.51% of traders are still net-long USD/CAD, with the ratio of traders long to short currently standing at 2.28 to 1.

The number of traders net-long is 15.46% higher than yesterday and 26.83% lower from last week, while the number of traders net-short is 10.77% lower than yesterday and 4.77% lower from last week. The decline in net-long position has helped to alleviate the tilt in retail sentiment as 73.02% of traders were net-long USD/CAD last week, while the decline in net-short position comes as the exchange rate climbs to a fresh monthly high (1.2487) following the Fed rate decision.

With that said, it remains to be seen if the rebound from the yearly low (1.2007) will turn out to be a correction in the broader trend or a potential change in USD/CAD behavior amid the ongoing tilt in retail sentiment, but looming developments in the Relative Strength Index (RSI) may show the bullish momentum gathering, with a move above 70 in the indicator is likely to be accompanied a further correction in USD/CAD like the price action seen last year.