USD/JPY carves a series of higher highs and lows ahead of the Federal Reserve interest rate decision as the 10-Year US Treasury yield climbs to a fresh weekly high (1.65%), and the exchange rate may continue to retrace the decline from earlier this month if the central bank adopts a less dovish forward guidance for monetary policy.

USD/JPY appears to have reversed course ahead of the March low (106.37) as it trades back above the 50-Day SMA (108.41), and it remains to be seen if the Fed rate decision will derail the recent advance in the exchange rate as a bull-flag formation appears to be playing out in the 10-Year US Treasury yield.

However, the FOMC may tame speculation for a looming shift in monetary policy as Vice Chair Richard Clarida insists that “policy will not tighten solely because the unemployment rate has fallen below any particulareconometric estimate of its long-run natural level,” and the committee may keep the door open to further support the US economy as the central bank plans to “achieve inflation moderately above 2 percent for some time so that inflation averages 2 percent over time.”

As a result, USD/JPY may come under pressure if Chairman Jerome Powell and Co. strike a more dovish forward guidance, but the recent appreciation in the exchange rate may continue to coincide with the renewed in retail sentiment as the crowding behavior from 2020 resurfaces. 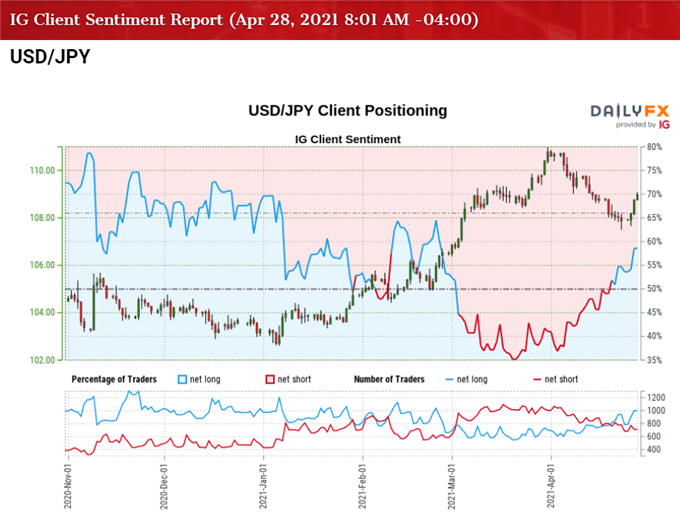 The IG Client Sentiment report shows 59.73% of traders are currently net-long USD/JPY, with the ratio of traders long to short standing at 1.48 to 1.

The number of traders net-long is 4.47% lower than yesterday and 26.93% higher from last week, while the number of traders net-short is 6.10% lower than yesterday and 14.74% lower from last week. The rise in net-long position comes as USD/JPY carves a series of higher highs and lows, while the decline in net-short interest has generated a further tilt in retail sentiment as 53.13% of traders were net-long the pair during the previous week.

With that said, it remains to be seen if the decline from the March high (110.97) will turn out to be a correction or a change in trend as the crowding behavior from 2020 resurfaces, but afurther rise in longer-dated US yields may prop up USD/JPY as the exchange rate appears to have reversed course ahead of the March low (106.37). 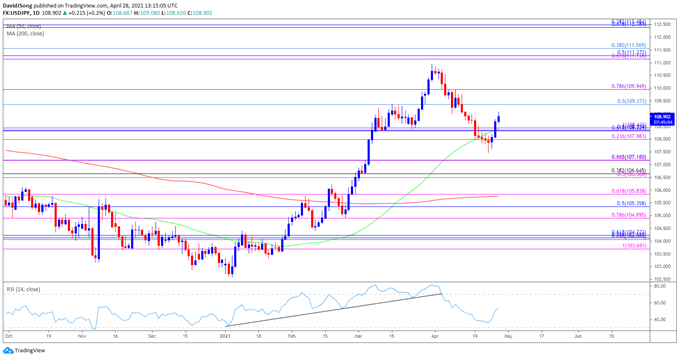