EUR/USD pulls back from a fresh monthly high (1.2080) as the European Central Bank (ECB) boosts the pace of the pandemic emergency purchase programme (PEPP) for the second consecutive week, and the April interest rate decision may keep the exchange rate under pressure if the Governing Council shows a greater willingness to further support the monetary union.

The recent rebound in EUR/USD appears to have stalled as it fails to test the March high (1.2113), and the exchange rate may trade back within the descending channel from earlier this year as the ECB “expects purchases under the PEPP over the next quarter to be conducted at a significantly higher pace than during the first months of this year.”

It seems as though the ECB is on a preset course as the central bank plans to “review the purchase pace on a quarterly basis at its monetary policy meetings,” and more of the same from the Governing Council may produce headwinds for the Euro as updated consolidated financial statement shows the PEPP expanding EUR 28.4 billion in the week ending April 16 after rising EUR 21.3 billion the week prior. 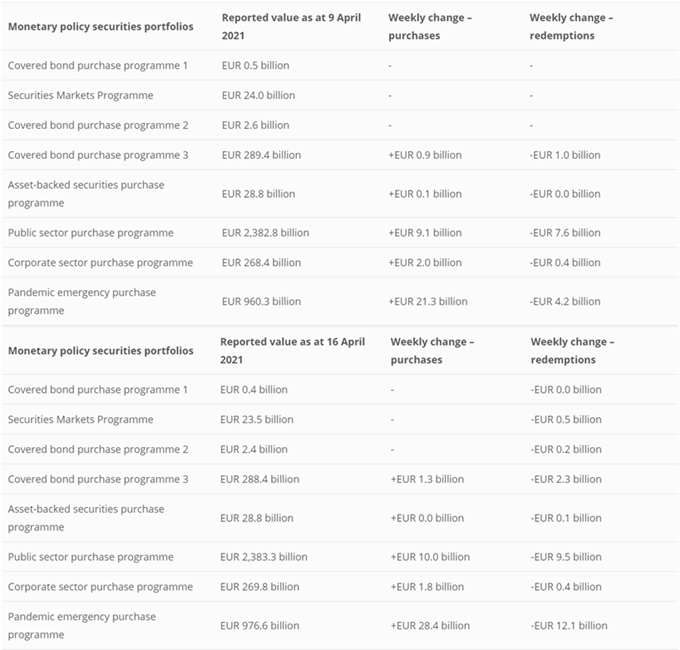 In turn, the ECB may keep the door open to further support the monetary union as Christine Lagarde and Co. “stand ready to adjust all of our instruments, as appropriate, to ensure that inflation moves towards our aim in a sustained manner,” but EUR/USD may make further attempts to break out of the downward trending channel from earlier this year as the crowding behavior from 2020 resurfaces. 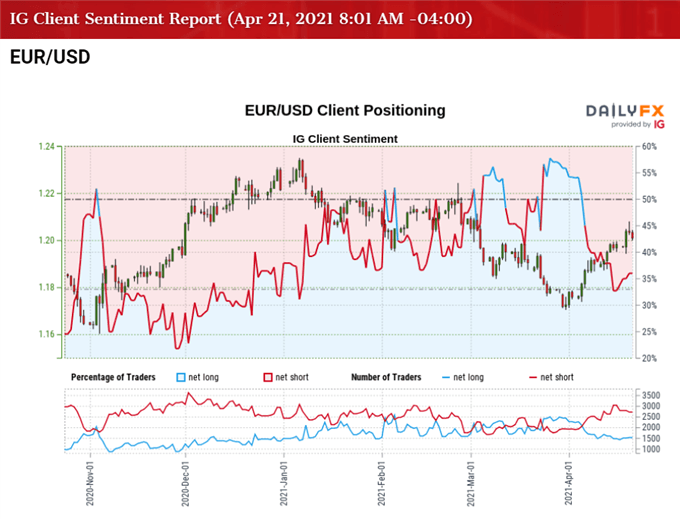 The IG Client Sentiment report shows only 34.43% of traders are currently net-long EUR/USD, with the ratio of traders short to long standing at 1.90 to 1.

The number of traders net-long is 1.25% lower than yesterday and 8.94% lower from last week, while the number of traders net-short is 2.74% higher than yesterday and 5.20% higher from last week. The decline in net-long position comes as EUR/USD pulls back from a fresh monthly high (1.2080), while the rise in net-short interest has upheld the renewed tilt in retail sentiment as 34.74% of traders were net-long the pair during the previous week.

With that said, it remains to be seen the failed attempt to test the March high (1.2113) will keep EUR/USD within the descending channel from earlier this year as the crowding behavior from 2020 resurfaces, but the ECB rate decision may drag on the exchange rate as the central bank plans to boost the pace of the PEPP in the second quarter of 2021.