USD/CAD continues to trade within the March range as it struggles to push back above the 50-Day SMA (1.2622), and the update to Canada’s Employment report may keep the exchange rate below the moving average as job growth is expected to increase for the second consecutive month.

The recent series of higher highs and lows in USD/CAD may unravel as the 50-Day SMA (1.2622) appears to be acting as resistance, and the exchange rate may give back the rebound from the monthly low (1.2502) as the moving average continues to track the negative slope carried over from the previous year.

The update to Canada’s Employment report may drag on USD/CAD as the economy is projected to add 100.0K jobs in March, while the jobless rate is expected to narrow to 8.0% from 8.2% in February. The ongoing improvement in the labor market may encourage the Bank of Canada (BoC) adopt an improve outlook as “the economy is proving to be more resilient than anticipated to the second wave of the virus and the associated containment measures.”

However, it seems as though the BoC is in no rush to switch gears as “the Governing Council judges that the recovery continues to require extraordinary monetary policy support,” and it remains to be seen if Governor Tiff Macklemand Co. will adjust the forward guidance at the next meeting on April 21 as the central bank is slated to release the updated Monetary Policy Report (MPR).

Until then, USD/CAD may continue to track the March range as it struggles to push back above the 50-Day SMA (1.2622), but the tilt in retail sentiment looks poised to persist as traders have been net-long the pair since May 2020. 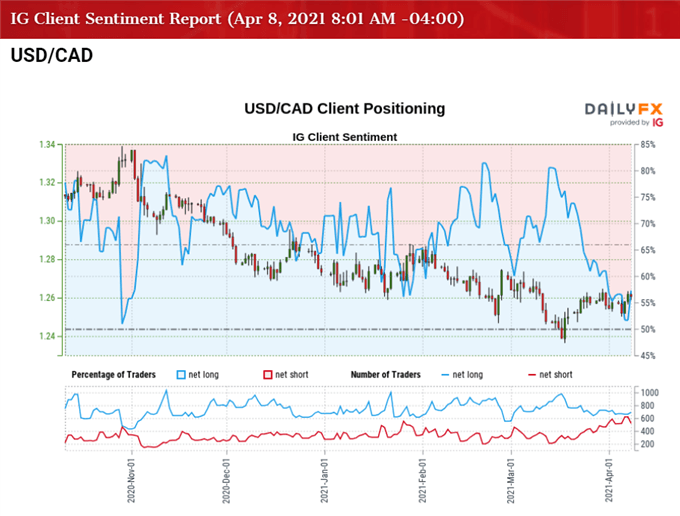 The IG Client Sentiment report shows 57.13% of traders are currently net-long USD/CAD, with the ratio of traders long to short standing at 1.33 to 1.

The number of traders net-long is 2.00% higher than yesterday and 2.89% higher from last week, while the number of traders net-short is 4.29% higher than yesterday and 6.96% lower from last week. The crowding behavior in USD/CAD has abated despite the rise in net-long interest as 60.77% of traders were net-long the pair the previous week, while the decline in net-short position comes as the exchange rate attempts to push back above the 50-Day SMA (1.2622).

With that said, the rebound from the March low (1.2365) may turn out to be a correction in the broader trend rather than a shift in USD/CAD behavior as the tilt in retail sentiment persists, and lack of momentum to hold above the 50-Day SMA (1.2622) may lead to a further decline in the exchange rate as the moving average continues to reflect a negative slope.