NZD/USD struggles to retain the advance following the Federal Reserve interest rate decision amid the ongoing rise in longer-dated US Treasury yields, but the broader outlook remains constructive as the opening range for March remains intact following the failed attempt to test the 20201 low (0.7096).

The update to New Zealand’s Gross Domestic Product (GDP) report appears to have been overshadowed by the Fed rate decision as Chairman Jerome Powell and Co. see the benchmark interest rate sitting near zero through 2023, with the exchange rate tagging a fresh weekly high (0.7269) despite the unexpected contraction in New Zealand’s growth rate.

Nevertheless, it remains to be seen if the GDP report will influence the monetary policy outlook as New Zealand contracts 0.9% during the last three months of 2020, with the third quarter reading reflecting a similar dynamic amid a downward revision to +0.2% from an initial print of +0.4%.

Signs of a protracted recovery may put pressure on the Reserve Bank of New Zealand (RBNZ) to further support the economy as the central bank “remains prepared to provide additional monetary stimulus if necessary,” and the central bank may keep the door open to implement a negative interest rate policy (NIRP) as “the operational work to enable the OCR (official cash rate) to be taken negative if required is now completed.”

However, it seems as though the RBNZ is in no rush to deploy more unconventional tools as the “Committee agreed that current monetary policy settings were appropriate to achieve its inflation and employment remit,” and Governor Adrian Orr and Co may stick to the sidelines at the next meeting on April 14 as the central bank relies on its balance sheet to achieve its policy targets.

Until then, swings in risk appetite may sway NZD/USD as the US Dollar broadly reflects an inverse relationship with investor confidence, while the tilt in retail sentiment looks poised to persist as traders have been net-short the pair since October. 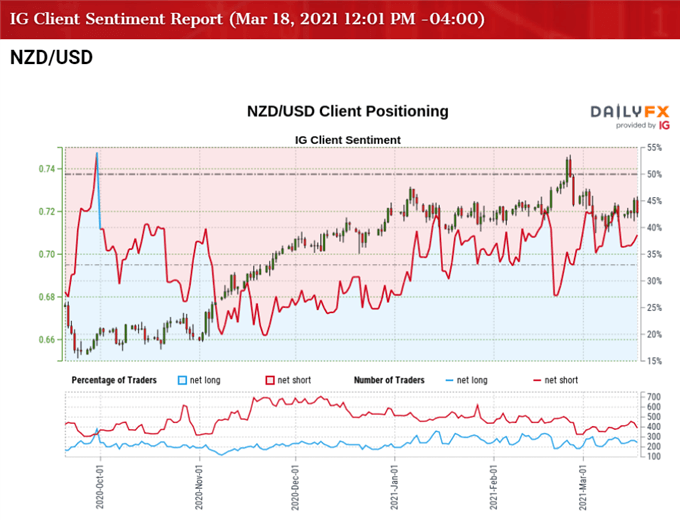 With that said, the pullback from the February high (0.7465) may turn out to be an exhaustion in the broader trend rather than a change in behavior especially as the FOMC retains the current path for monetary policy, but the exchange rate may consolidate through the remainder of week as it tracks the opening rang for March.