USD/CAD tracks the opening range for March as it pulls back from the 50-Day SMA (1.2702), but the Bank of Canada (BoC) interest rate decision on March 10 may influence the exchange rate if the central bank adjusts the forward guidance for monetary policy.

USD/CAD is little changed from the start of the week even as longer-dated US Treasury yields trade above pre-pandemic levels, and more of the same from the BoC may generate a limited market reaction as the central bank is widely expected to retain the current course for monetary policy.

The BoC may merely attempt to buy time as Governor Tiff Macklem and Co. are scheduled to update the Monetary Policy Report (MPR) in April, and the central bank may reiterate its commitment to “continue its QE (quantitative easing) program until the recovery is well underway” as the benchmark interest rate sits at its effective lower bound.

However, the BoC may gradually change its tone over the coming months as the central bank pledges to adjust its QE program “as the Governing Council gains confidence in the strength of the recovery,” and USD/CAD may continue to exhibit the bearish price action seen in 2020 if Governor Macklem and Co. show a greater willingness to switch gears. 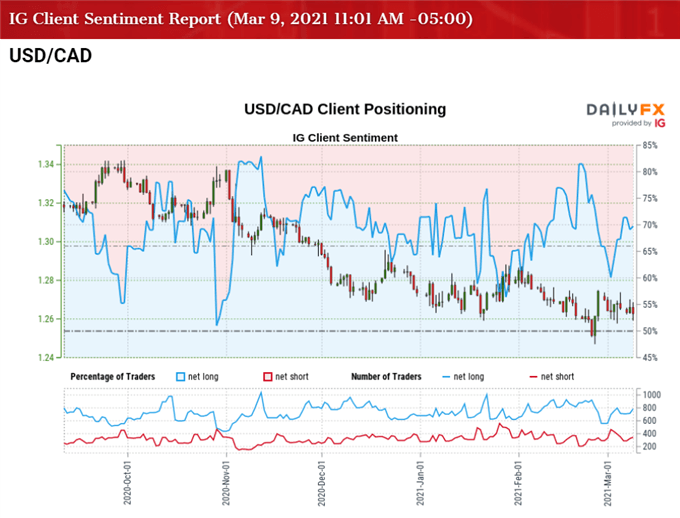 The IG Client Sentiment report shows 67.87% of traders are still net-long USD/CAD, with the ratio of traders long to short standing at 2.11 to 1.

The number of traders net-long is 7.17% higher than yesterday and 11.93% higher from last week, while the number of traders net-short is 8.22% higher than yesterday and 20.91% lower from last week. The rise in net-long interest along with the decline in net-short position has spurred a further tilt in retail sentiment as 60.41% of traders were net-long USD/CAD last week, and the advance from the February low (1.2468) may turn out to be correction in the broader trend rather than a change in behavior like the price action seen in 2020.

With that said, USD/CAD may continue to track the monthly opening range if the BoC rate decision generates a limited reaction, butthe bearish price seen in 2020 may also materialize throughout this year as especially as the exchange rate struggles to hold above the 50-Day SMA (1.2702).