EUR/USD extends the pullback from the monthly high (1.2170) as the update to the US Retail Sales report sparks a bullish reaction in the Greenback, but the broader outlook remains constructive as the exchange rate breaks out of the descending channel from earlier this year.

EUR/USD trades back below the 50-Day SMA (1.2150) as the rebound from the monthly low (1.1952) unravels, but the account of the European Central Bank’s (ECB) January meeting may curb the recent decline the exchange rate as the Governing Council plans to carry out the pandemic emergency purchase programme (PEPP)until at least the end of March 2022, with a total envelope of EUR 1.850 trillion.

It seems as though the ECB is in wait-and-see mode after expanding the PPEP by EUR 500B at its last meeting for 2020, and the transcript from the January meeting may ultimately tame speculation for additional monetary support as the central bank insists that “the risks surrounding the euro area growth outlook remain tilted to the downside but less pronounced.”

In turn, the ECB may stick to the same script at its next meeting on March 11 as President Christine Lagarde emphasizes that “our preferred tool is the pandemic emergency purchase programme,” and it seems as though the Governing Council will rely on its current measures to safeguard the Euro Area as European policymakers prepare to distribute the EUR 750B Next Generation EU recovery fund starting in 2021.

As a result, key market themes may continue to sway EUR/USD as both the ECB and Federal Reserve rely on their balance sheets to achieve their policy targets, and the US Dollar may continue to reflect an inverse relationship with investor confidence as the Federal Open Market Committee (FOMC) stays on track to “increase our holdings of Treasury securities by at least $80 billion per month and of agency mortgage-backed securities by at least $40 billion per month.” 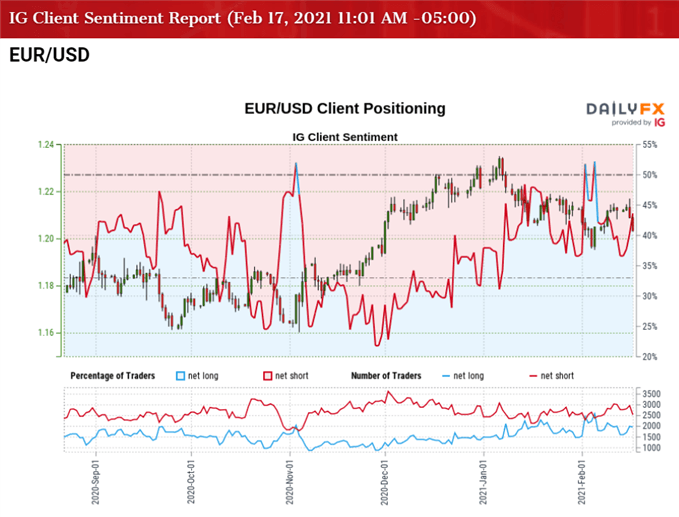 Meanwhile, the crowding behavior from 2020 has resurfaced amid the recent shift in retail sentiment, with the IG Client Sentiment report showing 47.04% of traders currently net-long EUR/USD as the ratio of traders short to long stands at 1.13 to 1.

The number of traders net-long is 8.36% higher than yesterday and 3.84% higher from last week, while the number of traders net-short is 4.25% lower than yesterday and 19.28% lower from last week. The rise in net-long interest has helped to alleviate the crowding behavior in EUR/USD as only 40.05% of traders were net-long during the previous week, while the decline in net-short position could be a function of profit-taking behavior as EUR/USD extends the pullback from the monthly high (1.2170).

With that said, it remains to be seen if the decline from the January high (1.2350) will turn out to be a correction in the broader trend rather than a change in EUR/USD behavior as it breaks out of the descending channel from earlier this year, and the exchange rate may make further attempts to climb back above the 50-Day SMA (1.2150) as the Relative Strength Index (RSI) clears the downward trend from December.