EUR/USD struggles to extend the advance following the US Non-Farm Payrolls (NFP) report as European Central Bank (ECB) President Christine Lagarde warns that the Euro Area “will not see a return to pre-pandemic levels of economic activity before mid-2022,” and the exchange rate may give back the rebound from the monthly low (1.1952) as the Relative Strength Index (RSI) still tracks the downward trend carried over from December.

EUR/USD appears to be trading within a descending channel after snapping the January range, and the decline from the 2021 high (1.2350) may gather pace as the ECB appears to be in no rush to scale back its emergency measures.

In a recent interview with Le Journal du Dimanche, President Lagarde emphasized that “our commitment to the euro has no limits,” with the central bank head going onto say that “our preferred tool is the pandemic emergency purchase programme (PEPP), which differs from the ECB’s other asset purchase programmes,” as the Governing Council plans to carry out the PPEP until at least the end of March 2022, with a total envelope of EUR 1.850 trillion.

It seems as though the ECB will retain the current course for monetary policy as President Lagarde and Co. pledge to “reduce this support gradually as and when the pandemic subsides,” with the Euro at risk of facing headwinds ahead of the next meeting on March 11 as the central bank vows to “act for as long as the pandemic is causing a crisis situation in the euro area.”

In turn, key market themes may continue to sway financial markets as major central banks rely on their emergency tools to achieve their policy targets, and the US Dollar may continue to reflect an inverse relationship with investor confidence as the Federal Reserve stays on track to “increase our holdings of Treasury securities by at least $80 billion per month and of agency mortgage-backed securities by at least $40 billion per month.” 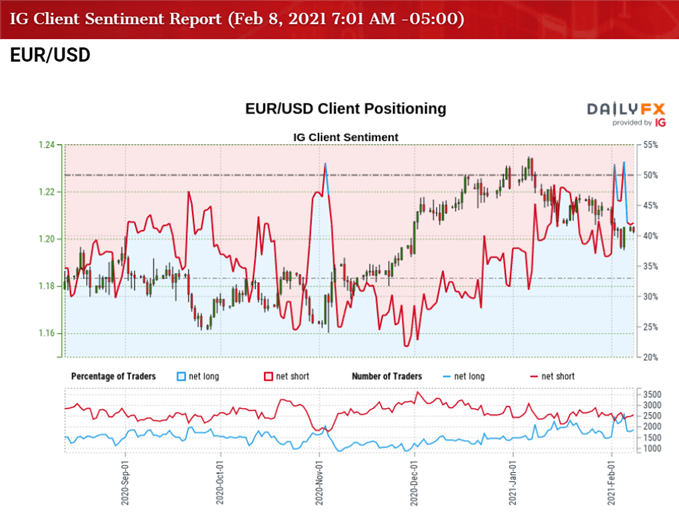 At the same time, the crowding behavior from 2020 has resurfaced following the recent shift in retail sentiment, with the IG Client Sentiment report showing 38.19% of traders net-long EUR/USD as the ratio of traders short to long stands at 1.62 to 1.

The number of traders net-long is 10.39% higher than yesterday and 1.51% lower from last week, while the number of traders net-short is 28.05% higher than yesterday and 29.04% higher from last week. The decline in net-long position comes as EUR/USD struggles to extend the advance following the US NFP report, while the surge in net-short interest has fuel a further tilt in retail sentiment as 46.42% of traders were net-long the pair during the previous week.

With that said, the decline from the January high (1.2350) may turn out to be a correction in the broader trend rather than a change in EUR/USD behavior as the crowding behavior from 2020 resurfaces, and the exchange rate may continue to trade within a descending channel as long as the Relative Strength Index (RSI) tracks the downward trend established in December.