EUR/USD extends the decline from earlier this week after taking out the January low (1.2054), and the exchange rate may face a larger pullback as the Relative Strength Index (RSI) still tracks the downward trend carried over from December.

EUR/USD remains under pressure amid the limited reaction to the Euro Area’s Consumer Price Index (CPI), with the exchange rate carving a series of lower highs and lows ahead of the US Non-Farm Payrolls (NFP) report as it fails to preserve the January range.

It remains to be seen if the update to the NFP report will influence the near-term outlook for EUR/USD as the US economy is expected to add 50K jobs in January, and a rebound in employment may generate a bullish reaction in the US Dollar as it encourages the Federal Reserve to retain the current course for monetary policy.

It seems as though the Federal Open Market Committee (FOMC) will rely on its current tools to achieve its policy targets as the central bank insists that “our forward guidance for the federal funds rate along with our balance sheet guidance will ensure that the stance of monetary policy remains highly accommodative, and Chairman Jerome Powell and Co. may stick to the same script at the next interest rate decision on March 17 as the committee remains “committed to using our full range of tools to support the economy.” 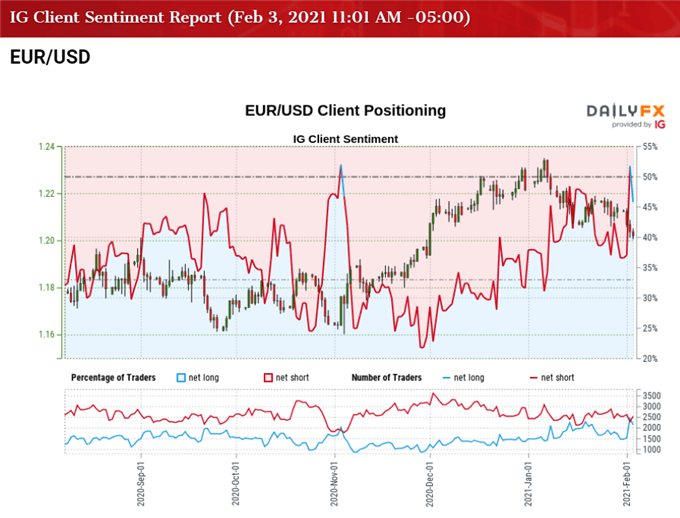 The rise in net-short position comes as EUR/USD extends the decline from earlier this week to trade to a fresh yearly low (1.2004), while the rise in net-long interest helped to alleviate the tilt in retail sentiment as 44.74% of traders were net-long the pair during the previous week.

With that said, the decline from the January high (1.2350) may turn out to be a correction in the broader trend rather than a change in EUR/USD behavior as the crowding behavior from 2020 resurfaces, and the exchange rate remains susceptible to a larger pullback as long as the Relative Strength Index (RSI) tracks the downward trend established in December.