NZD/USDstill tracks the January range following the Federal Reserve’s first interest rate decision for 2021, and the exchange rate may continue to consolidate ahead of the update to New Zealand’s Employment report amid the failed attempt to test last month’s low (0.7096).

NZD/USD appears to be stuck in a narrow range after bouncing back from the 50-Day SMA (0.7117), but the pullback from the January high (0.7315) may turn out to be an exhaustion in the broader trend rather than a change in market behavior as key market themes remain in place.

It remains to be seen if New Zealand’s Employment report will influence the near-term outlook for NZD/USD as job growth is expected to hold flat during the last three-months of 2020 after contracting 0.8% in the third quarter, and the figures may put pressure on the Reserve Bank of New Zealand (RBNZ) to provide additional monetary stimulus as “the Committee agreed that a prolonged economic downturn would make it difficult to achieve its inflation and employment objectives.”

As a result, the RBNZ may continue to strike a dovish forward guidance at its next meeting on February 23 as Governor Adrian Orr and Co. insist that “a lower or negative OCR (official cash rate), purchases of foreign assets, and interest rate swaps remain under consideration,” but it seems as though the central bank is in no rush to deploy more unconventional measures as “the Committee agreed that it remained appropriate for fiscal policy to play the primary role in bolstering economic outcomes, given the nature of the economic shock.”

Until then, swings in risk sentiment may sway NZD/USD as the US Dollar still reflects an inverse relationship with investor confidence, and the tilt in retail sentiment also looks poised to persist as the crowding behavior from the first half of 2020 resurfaces. 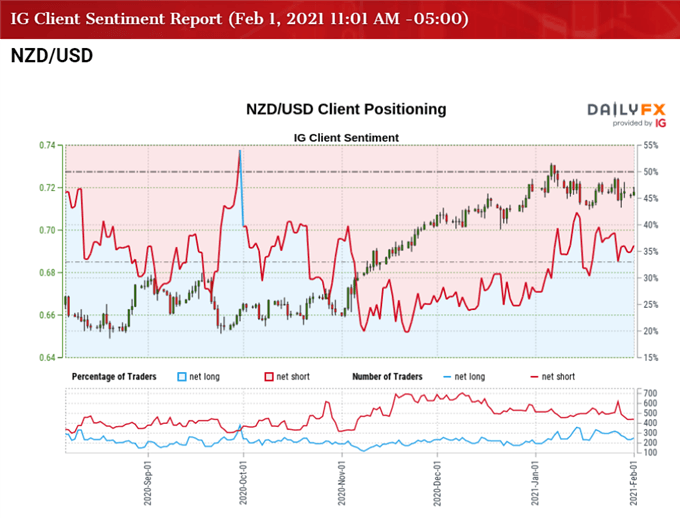 The decline in net-long position comes as NZD/USD tracks the January range, while the drop in net-short interest has helped to alleviate the tilt in retail sentiment as 33.72% of traders were net-long the pair during the previous week.

With that said, the pullback from the January high (0.7315) may end up being an exhaustion in the bullish price action rather than a change in trend like the behavior seen in late 2020, but the exchange rate may consolidate throughout the first week of February amid the failed attempt to test last month’s low (0.7096).