AUD/USD still tracks the opening range for January amid the limited reaction to Australia’s Employment report, and key market themes may keep the exchange rate afloat ahead of the Federal Reserve’s first meeting for 2021 as the central bank relies on its non-standard tools to support the US economy.

AUD/USD continues to trade in a defined range after taking out of the April 2018 high (0.7813), and it remains to be seen if key data prints coming out of Australia will influence the exchange rate as the Reserve Bank of Australia (RBA) carries out its quantitative easing (QE) program.

The update to Australia’s Consumer Price Index (CPI) is anticipated to show the headline reading for inflation holding steady at 0.7% during the last three-months of 2020, and the data may do little to sway the monetary policy outlook as “members agreed that the Board's policy measures had lowered interest rates across the yield curve, which was assisting the recovery.”

In turn, it seems as though the RBA will retain the current approach for monetary policy after announcing plans to purchase “$100 billion of government bonds of maturities of around 5 to 10 years over the next six months” in November, and Governor Philip Lowe and Co. may stick to the same script at the next meeting on February 2 as the central bank pledges to “keep the size of the bond purchase program under review.”

At the same time, the Federal Open Market Committee (FOMC) appears to be in no rush to switch gears as Chairman Jerome Powell and Co. vow to support the US economy “until substantial further progress has been made toward reaching the Committee's maximum employment and price stability goals,” and the US Dollar may continue to reflect an inverse relationship with investor confidence as the Fed’s balance sheet climbs to a fresh record high ($7.415 trillion) in January.

As a result, key market themes may continue to sway AUD/USD as the RBA acknowledges that “the improvement in risk sentiment has also been associated with a depreciation of the US dollar and an appreciation of the Australian dollar,” with the tilt in retail sentiment resurfacing like the behavior seen in the second half of 2020. 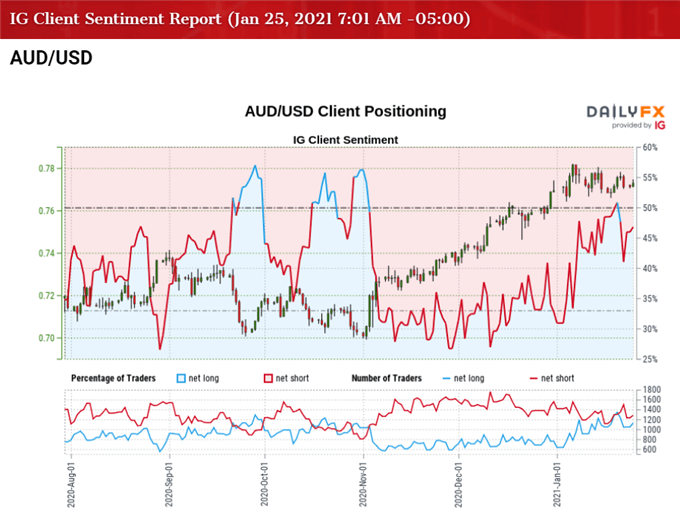 The rise in net-long interest has failed to fuel the recent flip in the IG Client Sentiment index as 48.61% of traders were net-long AUD/USD during the previous week, while the rise in net-short interest suggests the crowding behavior seem in 2020 is likely to be a reoccurring theme this year as major central banks still rely on their non-standard tools to achieve their policy targets.

With that said, the pullback from the monthly high (0.7820) may turn out to be an exhaustion in the bullish trend rather than a change in AUD/USD behavior like the price action seen in late 2020, but the Relative Strength Index (RSI) continues to deviate with price as the indicator no longer tracks the upward trend established in November.