USD/CAD started off 2021 by taking out last year’s low (1.2688) and the exchange rate may remain under pressure ahead of Canada’s Employment report as key trends from 2020 continue to influence financial markets.

USD/CAD attempts to retrace the decline from the start of the week as the US Dollar appreciate on the back of waning risk, and swings in risk sentiment may continue to sway the exchange rate as major central banks retain a dovish forward guidance for monetary policy.

It remains to be seen if the update to Canada’s Employment will influence the near-term outlook for USD/CAD as the economy is projected to shed 27.5K jobs in December, and signs of a protracted recovery may put pressure on the Bank of Canada (BoC) to further support the economy even though the central bank plans to carry out its quantitative easing (QE) program “at its current pace of at least $4 billion per week.”

In turn, the BoC is likely to retain a dovish forward guidance at its next meeting on January 20 as Governor Tiff Macklemand Co. remain “committed to providing the monetary policy stimulus needed to support the recovery,” and key market trends from 2020 may continue to influence USD/CAD as the central bank acknowledges that “a broad-based decline in the US exchange rate has contributed to a further appreciation of the Canadian dollar.” 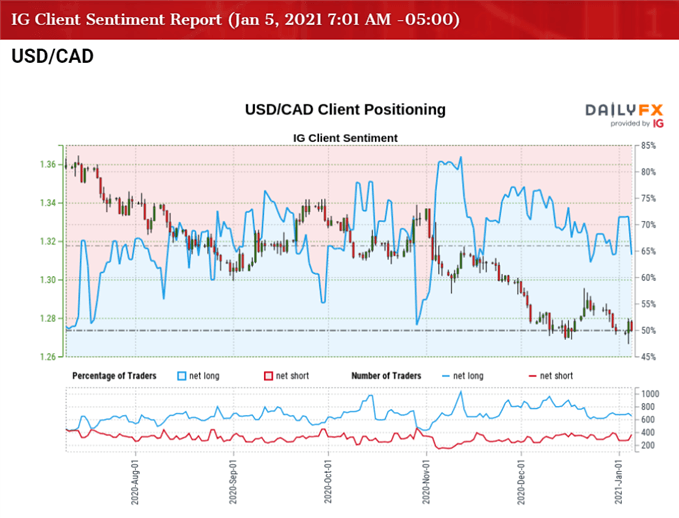 At the same time, the tilt in retail sentiment looks poised to persist in 2021 as traders have been net-long USD/CAD since May 2020, with the IG Client Sentiment report showing 61.74% of traders are net-long with the ratio of traders long to short at 1.61 to 1.

The number of traders net-long is 5.32% lower than yesterday and 5.98% lower from last week, while the number of traders net-short is 25.83% higher than yesterday and 10.26% higher from last week. The rise in net-short position comes as USD/CAD struggles to retain the rebound from earlier this week, while the decline in net-long interest has helped to alleviate the tilt in retail sentiment as 70.61% of traders of were net-long the pair during mid-December.

With that said, key market trends may keep USD/CAD under pressure as it takes out the 2020 low (1.2688), and swings in risk appetite may continue to sway the exchange rate ahead of Canada’s Employment report as the US Dollar still broadly reflects an inverse relationship with investor confidence.