AUD/USD trades to a fresh yearly high (0.7577) ahead of the update to Australia’s Employment report, and recent developments in the Relative Strength Index (RSI) indicates a further appreciation in the exchange rate as the indicator pushes into overbought territory.

AUD/USD extends the series of higher highs and lows from the previous week as the US Dollar continues to reflect an inverse relationship with investor confidence, and fresh data prints coming out of Australia may keep the exchange rate afloat as employment is expected to increase for the second consecutive month.

Australia is expected to add 50.0K in November following the 178.8K expansion the month prior, and the ongoing improvement in the labor market may keep the Reserve Bank of Australia (RBA) on the sidelines in 2021 as the “the economic news has, on balance, been better than we were expecting.”

It seems as though the RBA will rely on its current tools to support the economy the central bank insists that “we are still of the view that a negative policy interest rate in Australia is extraordinarily unlikely, with any benefits being outweighed by the costs,” and key market trends may continue to influence AUD/USD ahead of the next RBA meeting on February 1 as Governor Philip Lowe and Co. acknowledge that “the improvement in risk sentiment has also been associated with a depreciation of the US dollar and an appreciation of the Australian dollar.”

In turn, swings in risk sentiment may sway AUD/USD throughout the remainder of the year, and the tilt in retail sentiment also looks poised to persist as the crowding behavior from earlier this year reappears. 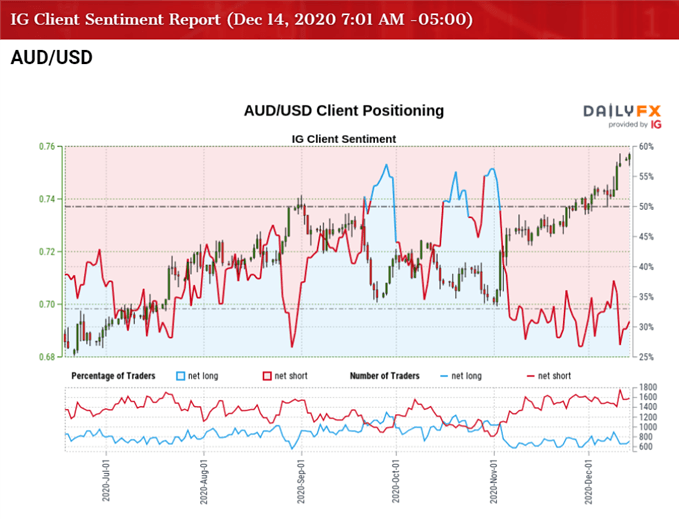 The IG Client Sentiment report shows only 30.73% of traders are net-long AUD/USD, with the ratio of traders short to long standing at 2.25 to 1.

With that said, key market trends may continue to influence AUD/USD as the US Dollar broadly reflects an inverse relationship with investor confidence, and the exchange rate may continue to carve a series of higher highs and lows as the Relative Strength Index (RSI) pushes into overbought territory to show the bullish momentum gathering pace.