USD/CAD pares the decline from earlier this week as the US Dollar appreciates on the back of waning risk appetite, and swings in investor confidence may continue to sway the exchange rate as the threat of protracted recovery puts pressure on major central banks to deploy more non-standard measures.

USD/CAD appears to be trading within a defined range after snapping the series of higher high and lows from the previous week, and the exchange rate may consolidate ahead of the virtual Group of 20 (G20) Summit on tap for November 21-22 as the recent surge in COVID-19 cases pushes major cities like New York to implement a growing number of social restrictions.

Despite hopes of a looming vaccine, discussions at the G20 Summit may largely revolve around the downside risks surrounding the global economy, and the group of major central bank leaders may collective endorse a dovish forward guidance as the ongoing pandemic raises the threat for a protracted recovery.

It remains to be seen if Federal Reserve officials will reveal new information ahead of its last meeting for 2020 as the central bank is slated to release the updated the Summary of Economic Projections (SEP) on December 16, and the fresh forecasts from Chairman Jerome Powell and Co. may help to shore up investor confidence as the Federal Open Market Committee (FOMC) remains “committed to using our full range of tools to support the economy and to help assure that the recovery from this difficult period will be as robust as possible.”

However, it seems as though the FOMC will stick to its current tools in 2021 as a growing number of central bank officials show a greater willingness to extend the lending facilities, and key market trends may largely carry into the year ahead as the Fed’s balance sheet approaches the record high.

In turn, the US Dollar may continue to reflect an inverse relationship with investor confidence as the FOMC vows to “increase its holdings of Treasury securities and agency mortgage-backed securities at least at the current pace,” and the tilt in retail sentiment also looks poised to persist as traders have been net-long USD/CAD since mid-May. 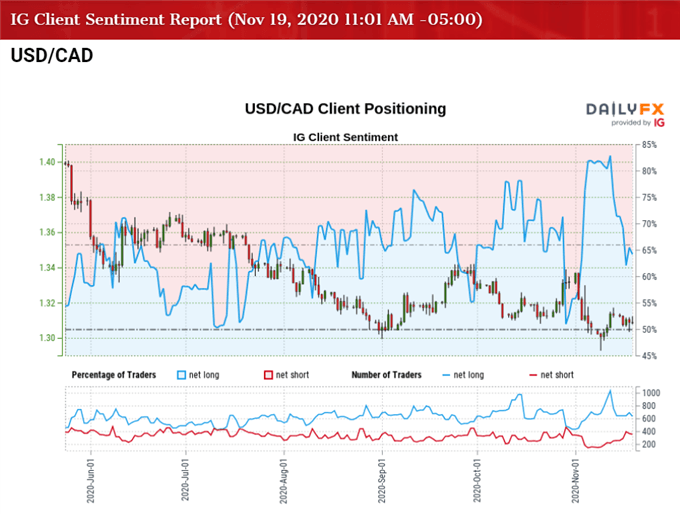 The rise in net-short position comes as USD/CAD snaps the series of higher highs and lows from the previous week, while the decline in net-long interest has done little to alleviate the tilt in retail sentiment as 62.18% of traders were net-long the pair at the start of the week.

With that said, key market trends may continue to influence USD/CAD as the crowding behavior looks poised to persist over the remainder of the month, but exchange rate may consolidate ahead of the G20 Summit as it appears to be stuck in a defined range.