USD/CAD pares the advance from the yearly low (1.2928) as the US Dollar weakens against commodity bloc currencies, which includes the Australian Dollar along with the New Zealand Dollar, and the Canadian Dollar may continue to appreciate against the Greenback as the exchange rate snaps the series of higher highs and lows from the previous week.

USD/CAD gives back the rebound following the US election even though the Bank of Canada (BoC) warns of a protracted recovery, and key market trends may keep the exchange rate under pressure as the Federal Reserve

In a recent speech, BoC Senior Deputy GovernorCarolyn Wilkinsstates that “COVID-19 will leave anunfortunate economic legacy through its impacts on investment, the work force and productivity,” and warns of “a situation where Canada is likely to exit the pandemic with a lower profile for potential output.”

It remains to be seen if the BoC will take additional steps at its last meeting for 2020 after recalibrating its quantitative easing (QE) program in October “to shift purchases towards longer-term bonds,” and Governor Tiff Macklem and Co. may largely endorse a wait-and-see approach on December 9 as the central bank pledges to retain its non-standard measure “until the recovery is well underway.” 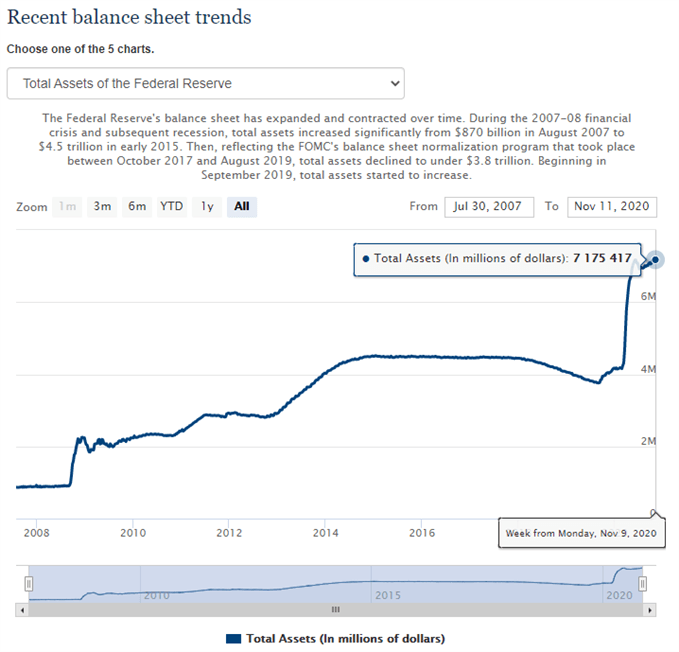 As a result, key market trends may carry into the end of the year as the Federal Reserve’s balance sheet approaches the record high ($7.177 trillion), with the figure increasing to $7.175 trillion in the week of November 9 from $7.158 trillion the week prior, and it seems as though the Federal Open Market Committee (FOMC) is in no rush to scale back its emergency tools as St. Louis Fed President James Bullard insists that “from a market perspective, the key idea has been the Fed is willing and able to act as a backstop to these various markets” while speaking on a virtual conference call.

In turn, swings investor confidence may continue to influence USD/CAD as the FOMC vows to “increase its holdings of Treasury securities and agency mortgage-backed securities at least at the current pace,” and it seems as though the tilt in retail sentiment will also persist ahead of 2021 as traders have been net-long the pair since mid-May. 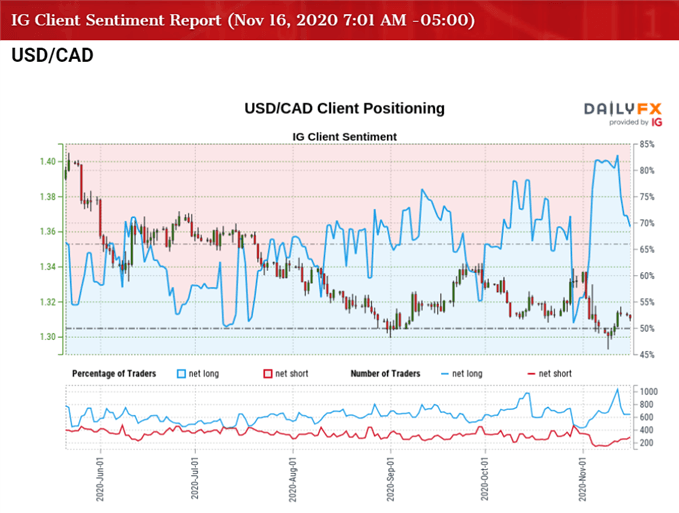 The jump in net-short position has done little to alleviate the tilt in retail sentiment as 54.87% of traders were net-long USD/CAD at the end of October, while the decline in net-long position could be a function of profit-taking behavior as the exchange rate snaps the series of higher highs and lows from the previous week.

With that said, key market trends may continue to influence USD/CAD over the remainder of the month as the reserve currency reflects an inverse relationship with investor confidence, and the exchange rate may continue the give back the advance from the yearly low (1.2928) as the US Dollar weakens against commodity bloc currencies.