EUR/USD initiates a series of higher highs and lows even though the European Central Bank (ECB) warns of a protracted recovery, and the exchange rate may stage a larger recovery over the coming days as the Governing Council appears to be on track to retain the current policy at the next meeting on October 29.

EUR/USD preserves the rebound from the monthly low (1.1689) as the US Dollar Index (DXY) trades within the confines of a Descending Channel, and the exchange rate may continue to retrace the decline from the yearly high (1.2011) as the Relative Strength Index (RSI) breaks out of the downward trend carried over from late July.

Looking ahead, fresh developments coming out of the US may sway EUR/USD as lawmakers prepares to vote on another fiscal stimulus package later this week, but the deadlock in Congress may produce headwinds for the Greenback as it puts pressure on the Federal Reserve to deploy more non-standard measures.

However, the US Dollar may continue to show an inverse relationship with investor confidence as the Federal Open Market Committee (FOMC) plans to unveil a “more explicit outcome-based forward guidance,” and key market trends may persist ahead of the next interest rate decision on November 5 as the Fed’s balance sheet increases for the second week to approach the peak from June.

At the same time, the ECB appears to be in no rush to alter the path for monetary policy even though President Christine Lagarde warns that the Euro Area recovery “now risks losing momentum” as the central bank head points out that “if the situation deteriorates, our projections, which we will revise in December, will obviously be gloomier.”

The comments suggests the ECB will retain a wait-and-see approach ahead of its last meeting for 2020 as the account of the September meeting reveals that the “PEPP (Pandemic Emergency Purchase Programme) envelope would likely have to be used in full to provide the necessary accommodation to offset the downward impact of the pandemic on the path of inflation,” and the Governing Council may stick to the same script on October 29 as President Lagarde insists that “the options in our toolbox have not been exhausted.”

In turn, key market trends may carry into the month ahead as the tilt in retail sentiment persists, with traders net-short EUR/USD since mid-May. 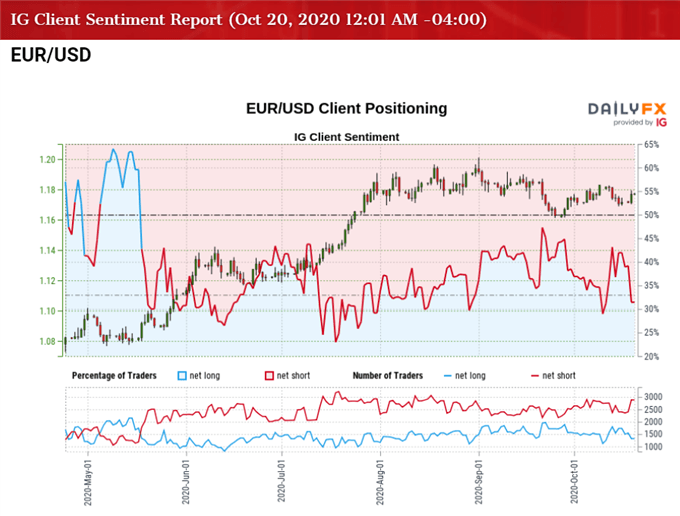 The decline in net-long position could be a function of profit-taking behavior as EUR/USD bounces back from the monthly low (1.1689), while the rise in net-short interest has spurred a further tilt in retail sentiment as 37.24% of traders were net-long the pair last week.

With that said, the decline from the yearly high (1.2011) may turn out to be an exhaustion in the bullish price action rather than a change in trendas the crowding behavior in EUR/USD remains, and the exchange rate may stage a larger rebound over the coming days as the Relative Strength Index (RSI) breaks out of the downward trend carried over from late July.