USD/CAD extends the rebound from the monthly low (1.3099) after carving a bullish outside day (engulfing) candle formation earlier this week, and the exchange rate may continue to appreciate over the coming days as the Relative Strength Index (RSI) breaks out of a downward trend.

USD/CAD appears to be on track to test the monthly high (1.3341) as the US Dollar appreciates on the back of waning risk appetite, and the Greenback may continue to reflect an inverse relationship with investor confidence as the Federal Open Market Committee (FOMC) relies on its emergency tools to support the US economy.

It seems as though the Federal Reserve will retain the current path for monetary policy as San Francisco Fed President Mary Daly, who votes on the FOMC in 2021, insists that “policy is in a good place right now,” with the official going onto say that “the Fed is fully committed to using every tool in its tool kit” while speaking at an event hosted by the Wall Street Journal.

At the same time, Richmond Fed President Thomas Barkin, who also votes on the FOMC in 2021, states that “the Fed will aim to keep rates low until we see moderate overshoots of inflation” while speaking at the Economic Club of New York, and the comments suggest the Fed will continue to endorse a dovish forward guidance as the central bank plans to “achieve inflation that averages 2 percent over time.”

However, the FOMC appears to be in no rush to deploy more unconventional tools as Cleveland Fed President Loretta Mester, a 2020 voting-member on the FOMC, states that the committee could “shift to longer-term Treasuries, as we did during the Great Recession,” and the wait-and-see approach may keep key market trends in place as the central bank prepares a “more explicit outcome-based forward guidance.”

In turn, the US Dollar may continue to reflect an inverse relationship with investor confidence ahead of the next FOMC interest rate decision on November 5, and the crowding behavior in USD/CAD also looks poised to persist over the remainder of the month as traders have been net-long the pair since mid-May. 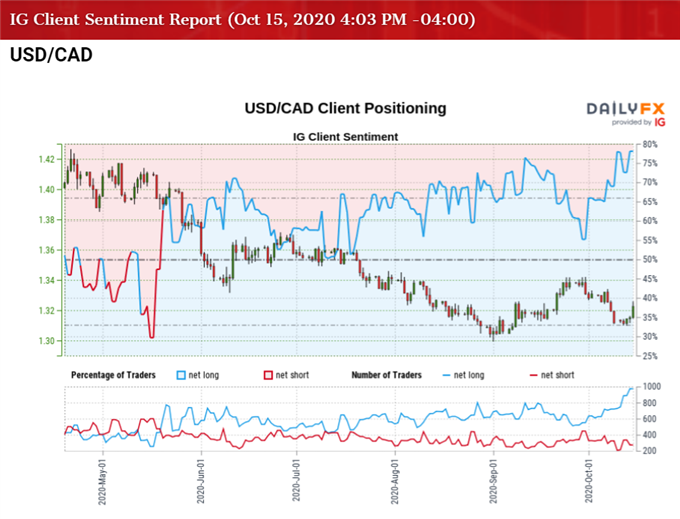 The decline in net-short position could be a function of stop-loss orders getting triggered as USD/CAD extends the rebound from the monthly low (1.3099), while the drop in net-long interest has helped to alleviate the tilt in retail sentiment as 75.93% of traders were net-long the pair earlier this week.

Nevertheless, the crowding behavior in USD/CAD looks poised to persist even though the FOMC vows to “increase its holdings of Treasury securities and agency MBS (mortgage-backed securities) at least at the current pace,” and current market trends may carry into the end of the month as the US Dollar reflects an inverse relationship with investor confidence.

With that said, swings in risk appetite may sway USD/CAD, but the exchange rate may attempt to test the monthly high (1.3341) as the Relative Strength Index (RSI) breaks out of a downward trend.