USD/CAD consolidatesas it quickly pulls back from a fresh monthly high (1.3419), but the August high (1.3451) remains on the radar as the Relative Strength Index (RSI) tracks the upward trend established in September and approaches overbought territory.

USD/CAD largely tracks the range bound price action from earlier this week, and an improvement in investor confidence may drag on the exchange rate as the US Dollar reflects an inverse relationship with risk appetite.

However, the move back above the former-support zone around the March/June low (1.3315) may keep USD/CAD afloat as the RSI approaches overbought territory, and the indicator may show the advance from the yearly low (1.2994) gathering pace if the oscillator breaks above 70 to reflect the extreme readings seen in March.

It remains to be seen if the shift in risk appetite will persist in October as the Federal Reserve’s balance sheetwidens for the second week to reach its highest level since June, but it seems as though Chairman Jerome Powell and Co. will rely on its current tools to support the US economy even though the central bank plans to “achieve inflation that averages 2 percent over time.”

In turn, swings in investor confidence may influence USD/CAD as the Federal Open Market Committee (FOMC) appears to be on track to retain the current policy at the next interest rate decision on November 5, but the tilt in retail sentiment looks poised to persist as traders have been net-long the pair since mid-May. 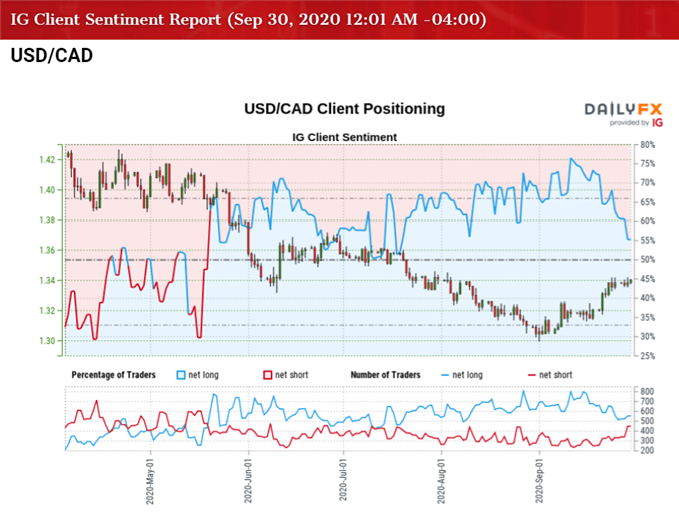 The decline in net-long position along with the surge in net-short interest has helped to alleviate the crowding behavior in USD/CAD as 61.86% of traders were net-long last week, and the tilt in retail sentiment may continue to abate as there appears to be a broader shift in market behavior.

With that said, USD/CAD may continue to consolidate following the string of failed attempt to test the August high (1.3451), but the exchange rate may stage a larger recovery as long as the Relative Strength Index (RSI) continues to track the upward trend established in September.