NZD/USD continues to retrace the decline from the monthly high (0.6798) on the back of US Dollar weakness, and a further improvement in risk appetite may fuel a larger recovery in the exchange rate amid the inverse relationship between the Greenback and investor confidence.

NZD/USDappears to have reversed course ahead of the August low (0.6489) as it extends the rebound from the monthly low (0.6536) and largely tracks the rebound in global equity prices.

Swings in investor confidence may continue to sway NZD/USD as major central banks rely on unconventional tools to support their economy, and current market trends may carry into October as the Federal Reserve’s balance sheetwidens for the second week to reach its highest level since June.

Meanwhile, the Reserve Bank of New Zealand (RBNZ) appears to be on track to deploy more non-standard measures as the central bank insists that “that a package of an FLP (Funding for Lending Programme) and a lower or negative OCR (official cash rate) could provide an effective way to deliver additional monetary stimulus.”

It remains to be seen if RBNZ will unveil a slew of new tools at its last meeting for 2020 as Governor Adrian Orr and Co. “agreed that monetary policy will need to provide significant economic support for a long time to come to meet the inflation and employment remit,” and the New Zealand Dollar may face headwinds ahead of the rate decision on November 11 as the central bank prepares to push monetary policy into uncharted territory.

Until then, current market trends may continue to influence NZD/USD as the RBNZ keeps the Large Scale Asset Purchase (LSAP) Programme at NZ$100 billion, but the recent shift in retail positioning warns of a potential change in market behavior as traders turn net-long for the first time since June. 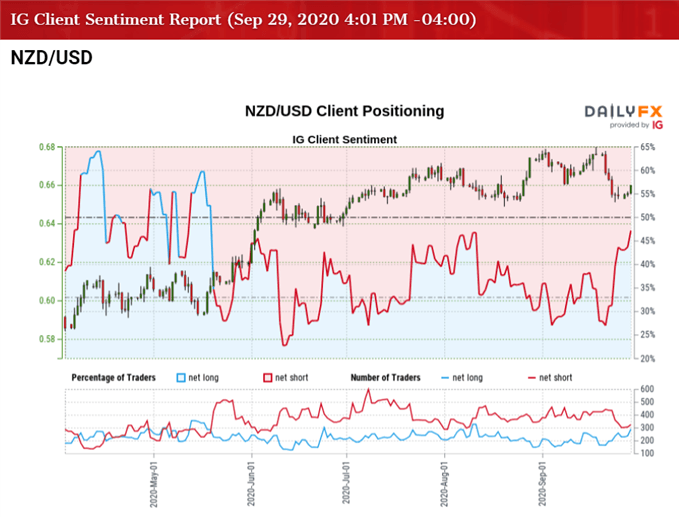 The surge in net-long position comes as NZD/USD appears to have reversed course ahead of the August low (0.6489), while the decline in net-short interest could be an indication of stop-loss orders getting triggered as the exchange rate extends the rebound from the monthly low (0.6536).

With that said, the shift in retail positioning warns of a potential change in NZD/USD behavior as 42.19% of traders were net-long the pair earlier this week, but swings in investor confidence may continue to sway the exchange rate amid the inverse relationship between the US Dollar and investor confidence.