EUR/USD trades in a narrow range after taking out the August low (1.1696), and the exchange rate may continue to consolidate as the European Central Bank (ECB) appears to be in no rush to alter the path for monetary policy.

EUR/USD holds near the monthly low (1.1612) as ECB President Christine Lagarde reiterates a dovish forward guidance and tells European lawmakers that the central bank “continues to stand ready to adjust all of its instruments, as appropriate, to ensure that inflation moves towards its aim in a sustained manner.”

The prepared remarks from President Lagarde suggest the ECB will continue to support the Euro Area after expanding the Pandemic Emergency Purchase Programme (PEPP) to EUR 1.35 trillion in June as “the recovery remains incomplete, uncertain and uneven.” President Lagarde insists that the Governing Council “will carefully assess all incoming information, including developments in the exchange rate, with regard to its implications for the medium-term inflation outlook,” and a growing number of ECB officials may comment on the Euro as the central bank struggles to achieve its one and only mandate for price stability.

Nevertheless, it seems as though the ECB will stick to the sidelines at its next meeting on October 29 as “the monetary policy measures that we have taken since early March are providing crucial support to the economic recovery and are helping to safeguard medium-term price stability,” and it seems unlikely that the Governing Council will intervene in foreign exchange markets as Vice-President Luis de Guindoswarns that “it would be suicidal to enter into any sort of dispute about exchange rates.”

In turn, swings in investor confidence may influence EUR/USD ahead of the ECB meeting as the pullback from the yearly high (1.2011) largely mimics the weakness in global equity prices, and current market trends may carry into October as retail traders have been net-short the pair since mid-May. 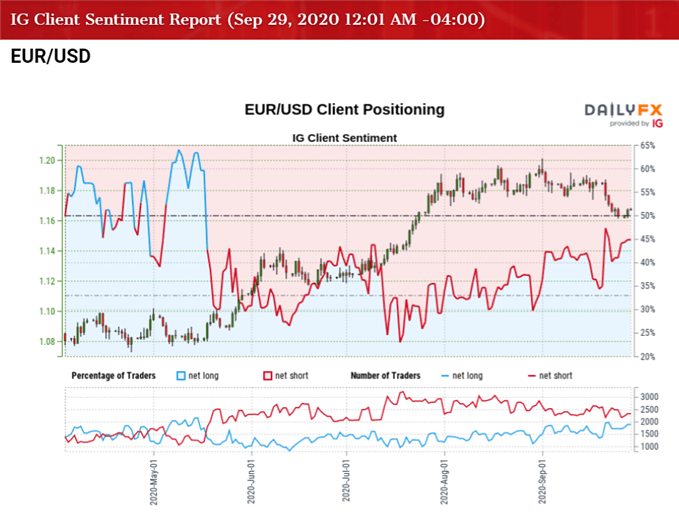 The tilt in retail sentiment has abated going into the end of the month as only 39.73% of traders were net-long EUR/USD last week, but the crowding behavior looks poised to persist in October even though the Fed’s balance sheet widens for the second week to reach its highest level since June.

With that said, the pullback from the yearly high (1.2011) may prove to be an exhaustion in the bullish price action rather than a change in trend as it largely mimics the correction in global equity prices, but EUR/USD may trade within a defined range as long as the Relative Strength Index (RSI) tracks the downward trend carried over from the end of July.