NZD/USD pulls back from a fresh yearly high (0.6798) ahead of the Reserve Bank of New Zealand (RBNZ) interest rate decision, but current market trends may carry into the end of the month as the bullish price action coincides with the tilt in retail sentiment.

NZD/USD clears the monthly opening range following the Federal Reserve interest rate decision as the central bank vow to “increase its holdings of Treasury securities and agency mortgage-backed securities at least at the current pace,” and the exchange rate may continue to exhibit a bullish behavior as the RBNZ appears to be on track to retain the current policy on September 23.

The update to New Zealand’s Gross Domestic Product (GDP) report may push the RBNZ on the sidelines as the growth rate contracts less-than-expected in the second quarter of 2020, but Governor Adrian Orr and Co. may continue endorse a dovish forward guidance after expanding the Large Scale Asset Purchase (LSAP) program to NZ$100 billion in August as the central bank insists that “a package of additional monetary instruments must remain in active preparation.”

It remains to be seen if the RBNZ will deploy more unconventional tools in 2020 as the New Zealand Institute of Economic Research (NZIER) argues against a negative interest rate policy (NIRP), with the Shadow Board stating that “an expansion of quantitative easing remains more favoured than a negative OCR in stimulating the economy.”

In turn, the RBNZ may rely on its current tools to support the economy as Chief Economist Yuong Ha revealed that “we’ve given the banking system until the end of the year to get ready so that the option is there for the Monetary Policy Committee (MPC) in a year’s time,” and more of the same from Governor Orr and Co. may keep current market trends in place as retail traders have been net-short NZD/USD since mid-June. 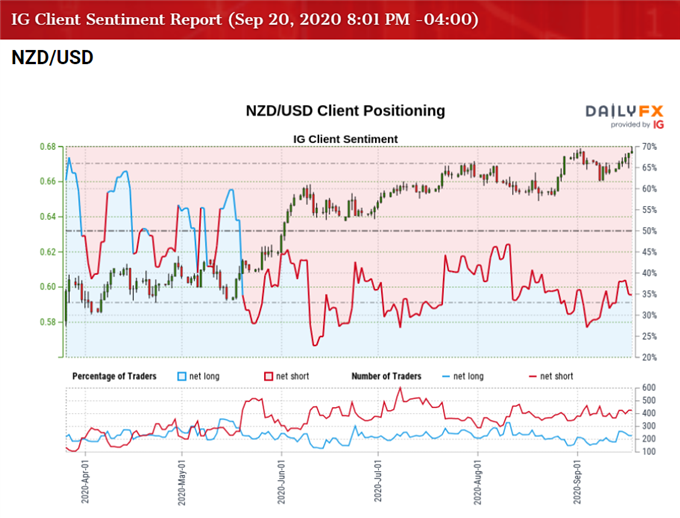 The decline in net-long position could be a function of profit-taking behavior as NZD/USD pulls back from a fresh yearly high (0.6798), but the rise in net-short interest suggests the tilt in retail sentiment will persist as 38.45% of traders were net-long NZD/USD last week.

With that said, current market trends may keep NZD/USD afloat if the RBNZ sticks to the status quo, and the bullish price action may continue to coincide with the tilt in retail sentiment as the exchange rate trades to fresh yearly highs in September.