NZD/USD preserves the series of higher highs and lows from earlier this week amid the limited reaction to the Federal Reserve interest rate decision, and the update to New Zealand’s Gross Domestic Product (GDP) report may push the Reserve Bank of New Zealand (RBNZ) to the sidelines in September as the growth rate contracts less-than-expected in the second quarter of 2020.

NZD/USD struggles to take out the weekly high (0.6759) as the Fed’s Summary of Economic Projections (SEP) show no change in the interest rate dot-plot, but the pullback from the yearly high (0.6789) may end up being an exhaustion in the bullish price action rather than a change in trend as Chairman Jerome Powell and Co. vow to “increase its holdings of Treasury securities and agency mortgage-backed securities at least at the current pace.”

Looking ahead, it remains to be seen if the 12.4% contraction in New Zealand GDP will influence the monetary policy outlook as the region faces its first recession since 2010, but the data may do little to sway the RBNZ as “output and employment recover sooner than projected in our May Monetary Policy Statement.”

In turn, the RBNZ may move to the sidelines after expanding the Large Scale Asset Purchase (LSAP) program to NZ$100 billion in August, and Governor Adrian Orr and Co. may largely endorse a wait-and-see approach at the September 23 interest rate decision even though the central bank insists that “a package of additional monetary instruments must remain in active preparation.”

Until then, current market trends may keep NZD/USD afloat as the Fed’s balance sheet climbs back above $7 trillion in August, and the tilt in retail sentiment looks poised to persist over the coming days as traders have been net-short the pair since mid-June. 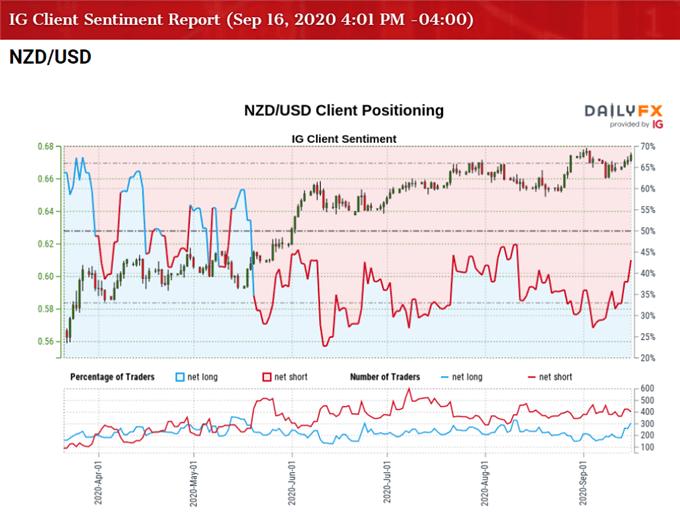 The recent decline in net-long position could be a function of profit-taking behavior as NZD/USD struggles to take out the weekly high (0.6759), but the rise in net-short interest suggests the tilt in retail sentiment will carry into the end of the month as 39.35% of traders were net-long the pair earlier this week.

With that said, current market trends may keep NZD/USD afloat ahead of the next RBNZ meeting, and the recent weakness in the exchange rate may prove to be an exhaustion in the bullish price action rather than a change in trend as it trades to fresh yearly high (0.6789) in September.