NZD/USD continues to pullback from the yearly high (0.6789) as the Reserve Bank of New Zealand (RBNZ) considers “a package of options” to further support the economy, and the New Zealand Dollar may face headwinds ahead of the next central bank meeting on September 22 as Governor Adrian Orr insists “that it is better to risk doing too much too soon, rather than too little too late.”

NZD/USD fails to extend the series of lower highs and lows from the previous week despite the kneejerk reaction to the US Non-Farm Payrolls (NFP) report, but recent remarks from the RBNZ appear to be dragging on the New Zealand Dollar as the central bank is “actively preparing a package of additional monetary policy tools to support the economy if required.”

The latest speech by Governor Orr suggests the RBNZ will deploy more unconventional tools, which “include negative wholesale interest rates and direct funding to banks,” as the central bank head emphasizes that “the design of the package needs to ensure our monetary policy decisions have their maximum impact.”

Governor Orr went onto say that “our commitment is to clearly communicate our future monetary policy strategies and tools, and when we might use them,” and it remans to be seen if the central bank will reveal a more detailed forward guidance at the September meeting as the RBNZ prepares the banking sector for a negative interest rate policy.

Until then, further hints of a looming shift in the path for monetary policy may continue to drag on the New Zealand Dollar, but current market trends may keep NZD/USD as the crowding behavior in the US Dollar carries into September. 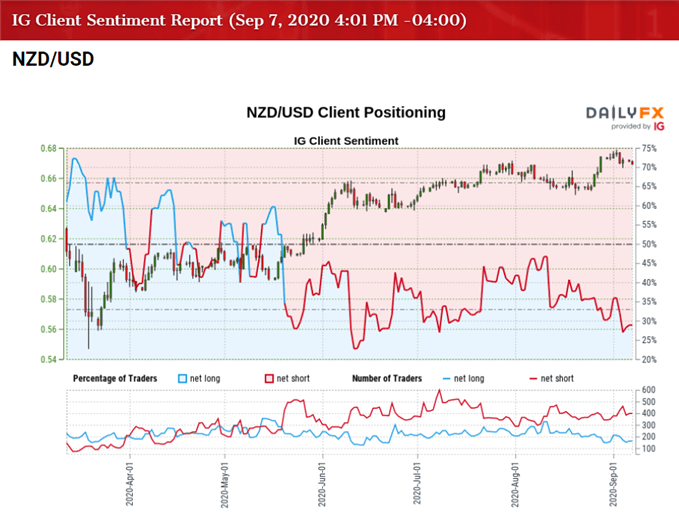 The recent rise in net-long position has helped to alleviate the tilt in retail sentiment as only 26.37%of traders were net-long NZD/USD last week, but the rise in net-short interest suggests the crowding behavior will persist even though the Federal Reserve’s balance sheet climbs back above $7 trillion in August.

With that said, the recent weakness in NZD/USD may prove to be an exhaustion in the bullish price action rather than a change in trend as the exchange rate trades to fresh yearly high (0.6789) in September, but the New Zealand Dollar may face headwinds ahead of the next RBNZ meeting as the central bank appears to be on track to deploy more non-standard measures.