NZD/USD pulls back from a fresh yearly high (0.6789) as the Reserve Bank of New Zealand (RBNZ) warns that the economic repercussion from the COVID-19 pandemic “will be severe and long-lasting,”, and the exchange rate may face a larger pullback over the coming days as the Relative Strength Index (RSI) flips ahead of overbought territory.

NZD/USD initiates a series of lower highs and lows after taking out the January high (0.6733) as RBNZ Governor Adrian Orr strikes a dovish outlook for monetary policy, with the central bank head providing an overview of the “additional tools that we are considering using as a package in the near future.”

It remains to be seen if the RBNZ will take additional steps to support the New Zealand economy as Governor Orr insists that “it was better to risk doing too much too soon, than too little, too late,” but the MPC may stick to the status quo at the next meeting on September 22 as the central bank head pledges to “outline our future monetary policy strategies and tools, and when we might use them.”

In turn, the RBNZ may gradually alter the forward guidance over the coming months, and speculation for additional monetary support is likely to produce headwinds for the New Zealand Dollar as the central bank ventures into uncharted territory.

Until then, current market trends may keep NZD/USD afloat as the Federal Reserve appears to be in no rush to scale back its emergency measures, and the crowding behavior in the US Dollar looks poised to persist as retail traders have been net-short the pair since mid-June. 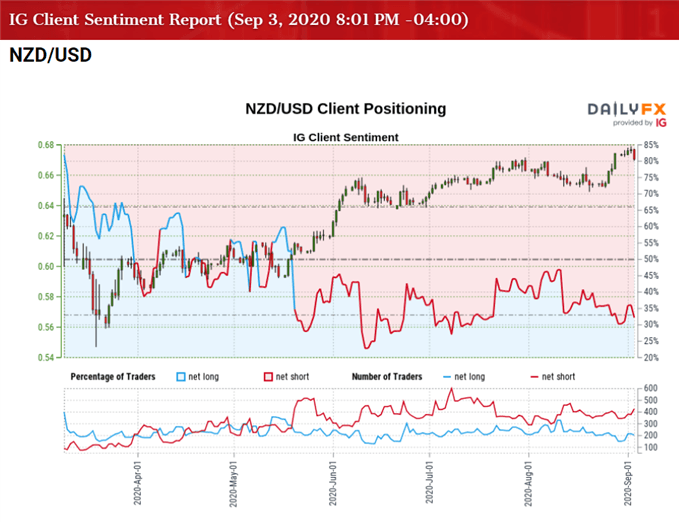 The decline in net-long position could be an indication of profit-taking behavior as NZD/USD pulls back from a fresh yearly high (0.6789), while the rise in net-short interest suggests the tilt in retail sentiment will persist even though the exchange rate takes out the January high (0.6733) in September.

With that said, the recent weakness in NZD/USD may prove to be an exhaustion in the bullish price action rather than a change in trend, but the exchange rate may face a larger pullback over the coming days as the Relative Strength Index (RSI) appears to be reversing course ahead of overbought territory.