EUR/USD Outlook: RSI Reverses from Trendline Resistance Ahead of NFP

EUR/USD cleared the August range to tag a fresh yearly high (1.2011), but the exchange rate struggles to retain the advance following the Federal Reserve Economic Symposium as the Relative Strength Index (RSI) continues to track the downward trend carried over from the previous month.

EUR/USD Outlook: RSI Reveres from Trendline Resistance Ahead of NFP

EUR/USD initiates a series of lower highs and lows in September even though Federal Reserve officialsoffer more detailsregarding the changes to the Statement on Longer-Run Goals and Monetary Policy Strategy, and the exchange rate may face a larger pullback ahead of the US Non-Farm Payrolls (NFP) report as the RSI reverses from trendline resistance to preserve the bearish formation established in August.

The NFP report may produce increased volatility in EUR/USD as the update is anticipated to show the US economy adding 1.4 million jobs in August, and a further improvement in the labor market may lead to a bullish reaction in the US Dollar as it puts pressure on the Federal Open Market Committee (FOMC) to adopt a less-dovish forward guidance for monetary policy.

However, signs of a protracted recovery may drag on the Greenback as the FOMC relies on its non-standard tools to support the US economy, and it remains to be seen if the fresh data prints will influence the monetary policy outlook as Chairman Jerome Powell and Co. plans to “achieve inflation that averages 2 percent over time.”

In turn, current market trends may continue to sway EUR/USD ahead of the next Fed interest rate decision on September 16 as the crowding behavior in the US Dollar looks poised to persist, with retail traders net-short the pair since mid-May. 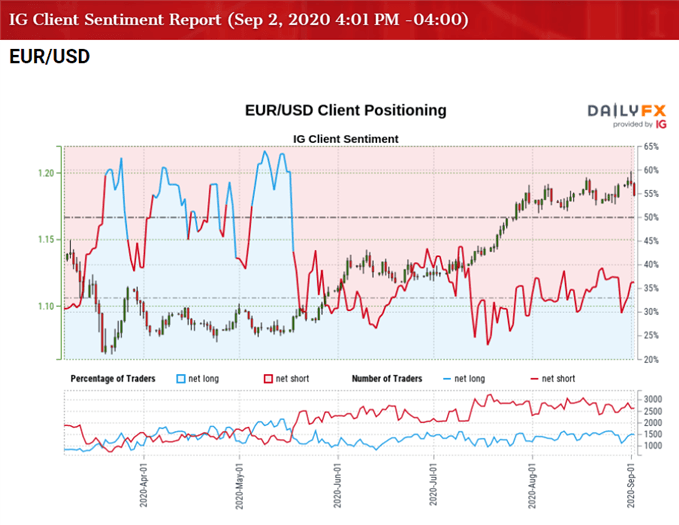 The jump in net-long position has helped to alleviate the tilt in retail sentiment as only 31.64% of traders were net-long EUR/USD at the start of the week, but open interest has fallen 3.76% from the previous week amid the decline in net-short interest.

It seems as though the crowding behavior in the US Dollar will linger over the coming days, but a further shift in retail sentiment may highlight a potential change in market behavior as the FOMC discusses an outcome-based approach versus a calendar-based forward guidance for monetary policy.

With that said, current market trends may keep EUR/USD afloat as the exchange rate tags a fresh 2020 high (1.2011) in September, but the exchange rate may face a larger pullback as long as the RSI preserves the downward trendcarried over from the previous month.