USD/CAD extends the series of lower highs and lows from the previous week as the Federal Reserve plans to “achieve inflation that averages 2 percent over time,” and the exchange rate appears to be on track to test the January low (1.2957) as the Relative Strength Index (RSI) flirts with oversold territory.

The decline in USD/CAD following the Federal Reserve Economic Symposiums appears to be sputtering as it bounces back from the weekly low (1.2994), but the recent rebound in the exchange rate may prove to be an minor pullback rather than a change in trend as key market themes look poised to persist in September.

Beyond the recent speech by Chairman Jerome Powell, fresh remarks from Governor Lael Brainard suggests the Federal Open Market Committee (FOMC) will retain the current policy at the next interest rate decision on September 16 even though Fed officials discuss an outcome-based approach versus a calendar-based forward guidance for monetary policy as “FAIT (flexible average inflation targeting) means that appropriate monetary policy would likely aim to achieve inflation moderately above 2 percent for a time to compensate for a period, such as the present, when it has been persistently below 2 percent.”

Governor Brainard asserts that “FAIT is better suited for the highly uncertain and dynamic context in which policymaking takes place,” and goes onto say that “it will be important for monetary policy to pivot from stabilization to accommodation” as the US economy is “likely to face COVID-19-related headwinds for some time.”

In turn, current market trends look poised to persist as the FOMC remains in no rush to scale back its emergency measures, and it seems as though the Bank of Canada (BoC) will also stick to the same script at its next meeting on September 9 as Governor Tiff Macklem insists that it will be “really important for monetary policy to provide support through the whole long recovery" while speaking at the Fed symposium.

Until then, it remains to be seen if the crowding behavior in the US Dollar will persist as retail traders have been net-long USD/CAD since mid-May. 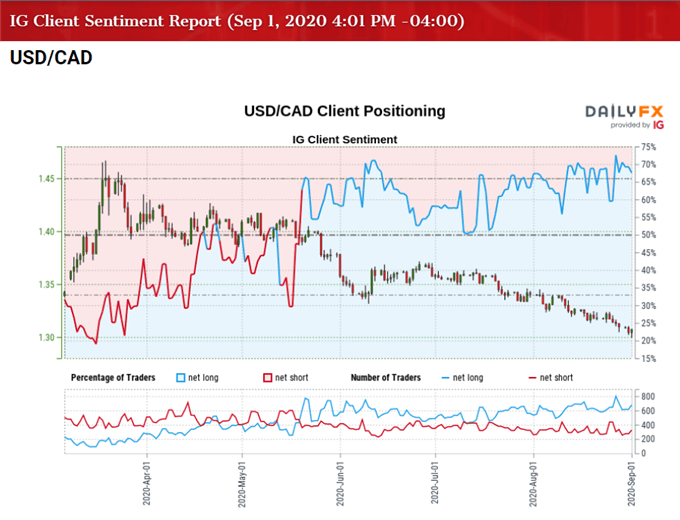 The decline in net-short position could be a function of profit-taking behavior as USD/CAD bounces back from the weekly low (1.2994), while the rise in net-long interest suggests the crowding behavior in the Greenback will persist even though the DXY index is on the verge of breaking a key support zone.

With that said, the recent rebound in USD/CAD may prove to be an minor pullback rather than a change in trend as key market trends look poised to persist in September, and the Relative Strength Index (RSI) may show the bearish momentum gathering pace as it flits with oversold territory.