NZD/USD struggles to retrace the decline following the Reserve Bank of New Zealand (RBNZ) interest rate decision even though the crowding behavior in the US Dollar persist, and the exchange rate may exhibit a more bearish behavior over the coming days as the Relative Strength Index (RSI) establishes a downward trend in August.

NZD/USD appears to have reversed course following the failed attempt to January high (0.6733) as the RBNZ expands the Large Scale Asset Purchase (LSAP) program to NZ$ 100B from NZ$ 60B, with the central bank going onto say that “the Committee also agreed that a package of additional monetary instruments must remain in active preparation.”

It seems as though the RBNZ will rely on its balance sheet to support the New Zealand economy as officials insist “monetary policy will continue to provide important economic support in the period ahead,” and Governor Adrian Orr and Co. may continue to expand the LSAP program over the coming months as the central bank warns that “further monetary stimulus is needed to achieve its remit objective.”

At the same time, the RBNZ may show a greater willingness to implement a negative interest rate policy (NIRP) in 2021 as Chief Economist Yuong Hapublicized that “we’ve given the banking system until the end of the year to get ready so that the option is there for the Monetary Policy Committee (MPC) in a year’s time,” and the central bank may continue to endorse a dovish forward guidance at its next meeting on September 23 as “there remains a downside risk to our baseline economic scenario.”

In turn, the New Zealand Dollar may face headwinds throughout the remainder of the year as the RBNZ reveals that “any future move to a lower or negative OCR (official cash rate), if complemented by a Funding for Lending Programme, could provide an effective way to deliver monetary stimulus in addition to the expanded LSAP if needed,” and it remains to be seen if the crowding behavior in the US Dollar will carry into the months ahead as retail traders have been net-short NZD/USD since mid-June. 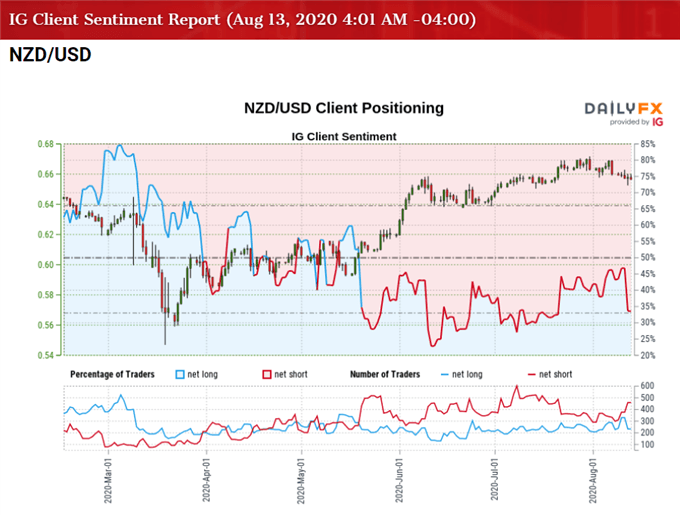 The decline in net-long position could be indicative of profit-taking behavior as NZD/USD fails to test the January high (0.6733), while the rise in net-short interest suggests the crowding behavior in the US Dollar will persist even though the DXY indexhas plummeted more than 8% off the April highs.

With that said, current market conditions provide little evidence of a change in trend as NZD/USD trades within the July range, but the exchange rate may exhibit a more bearish behavior over the coming days as the Relative Strength Index (RSI) establishes a downward trend in August.